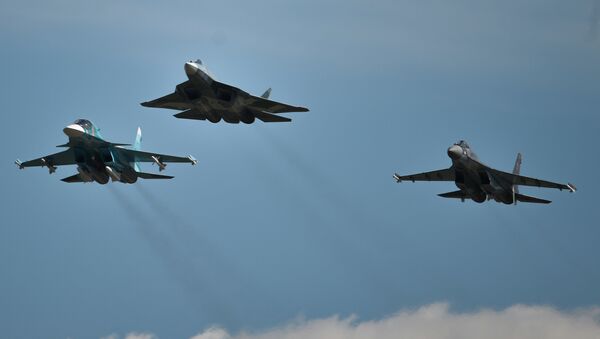 © Sputnik / Vladimir Astapkovich
/
Go to the mediabank
Subscribe
International
India
Africa
The 13th International Aviation and Space Salon MAKS-2017 kicks off on Tuesday in the Russian city of Zhukovsky.

Russia
New Chassis Control Systems of T-50 Fighter Jet to Be Shown at MAKS-2017
About 700 Russian and 180 foreign corporations and companies from 36 countries are expected to participate in the air show, including Russia's state technology corporation Rostec, arms exporter Rosoboronexport, arms manufacturer Almaz-Antey, Russian Helicopters, and several companies from the space industry.

The air show is organized by Russia's Rostec corporation, and the Ministry of Industry and Trade, and will be visited by top Russian and foreign officials and businesspeople, including Russian President Vladimir Putin and Chair of the German Aerospace Center's (DLR) Executive Board Pascale Ehrenfreund.

"The president will tour exhibition stands to see production models, prototypes and pre-prototypes and developments by Russian and foreign aerospace companies, and will chair a working meeting on civil aviation development," the Kremlin press service said in a statement.

MAKS is also supported by the Russian president, something that will guarantee a high level of organization and representation.

One of the salon’s goals is to showcase Russian-made, high-tech equipment and demonstrate the openness of the Russian market to joint projects with foreign partners.

'Maneuverable and Reliable': MiG-35 to Steal the Show at MAKS-2017 (VIDEO)
The first day of the air show will be dedicated to the opening ceremony and visits by official delegations. The second and third days are reserved for business interactions and the last three days will be open to the public.

NEW EQUIPMENT, FEATURES TO BE SHOWCASED AT MAKS

The National Research Center "Zhukovsky Institute" will showcase a new anti-helicopter mine and a prototype of the light multipurpose aircraft. Additionally, prototypes of a high-speed civil aircraft, supersonic business and passenger aircraft, and heavy transport aircraft with the integrated circuit will be shown.

Russia's Rosoboronexport Plans Over 10 Contracts, Cooperation Deals at MAKS 2017
Russia's Concern Radio-Electronic Technologies (KRET), part of the Rostec state corporation, said on July 13 that it would hand over new electronic warfare (EW) complexes to the country's Aerospace Forces during MAKS. Over 200 projects developed by KRET will be showcased at the exhibition.

Russian Deputy Minister for Trade and Industry Oleg Bocharov said that MAKS-2017 was mainly regarded as a business event.

"For us, it is very important that a large number of aviation companies from 47 states were accredited this year. According to the business meetings system MatchMaking, more than a thousand talks have already been scheduled. We expect high business activity," Bocharov said.

According to the official, Russia’s MC-21 twin-engine, short-and mid-range airliner is one of the main new products to be showcased at MAKS. He also considers the demonstration flight of the Be-200 amphibious aircraft a very important point of the MAKS program.