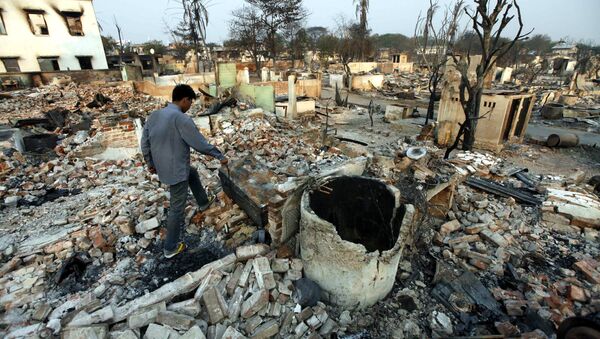 © AP Photo / Khin Maung Win
Subscribe
International
India
Africa
Religious clashes have become a characteristic feature not only in the Middle East and Europe. South Asia faces the same challenges: terrorism, international criminal networks and illegal migration. Sputnik was able to talk to the leader of Sri Lanka’s radical Buddhists, a former Soviet student, who is heading the crusade against "global jihad."

Asia
Sri Lanka Accused of Raping Tamil Men Years After Civil War Has Ended
Doctor Dilanthe Withanage speaks very good Russian as he studied engineering in the Soviet Union. After returning to his home country of Sri Lanka, he took the helm of the organization called Bodu Bala Sena (BBS) or the "Buddhist Power Force" which calls for the creation of a "Buddhist International" against the so-called "global jihad."

"There is a certain tendency when people reject the Buddhist religion for the sake of money. And the money comes from the Persian Gulf monarchies. This is all because of poverty. However many Muslims also live in poverty. We are not against Muslims. The fact of the matter is that many Muslims easily fall within the influence of Wahhabi propaganda. Poverty is a breeding ground for the religious radicalism," Dilanthe Withanage told Sputnik.

According to Dr Withanage, social misery is pushing Muslims towards migration to other countries, which resulted in the Rohingya humanitarian crisis in Myanmar. Some of the experts consider the Rohingya an ethnic Muslim group while others are sure that they are just a community of migrants practicing Islam. There are over a million Rohingyas living in Myanmar without any citizenship.

Asia
Cluster Bombs Possibly Used in Sri Lanka Civil War
In 2012, the country became the site of fiercest clashes between Muslims and Buddhists, which resulted in mass murders.

"Rohingya is an example of a Muslim occupation. They are illegal migrants. We, the Buddhists are a minority and should defend ourselves," Withanage told Sputnik.

Buddhist radicals, whose announced goal is the containment of Islam, largely resemble European ultra-right fighters. Similar to their western counterparts, they are convinced that the Muslim population in Asia is growing very fast.

Not so peaceful Buddhism

Incredible as it may seem, one of the reasons behind the escalating clashes between Muslims and Buddhists, one of the most "peaceful religion, in Southeastern Asia, is the tradition of violence, which is characteristic to Buddhism.

Mahavamsa, ("Great Chronicle"), historical chronology of Ceylon (modern Sri Lanka), written in the 5th or 6th century, probably by the Buddhist monk Mahanama, which deals more with the history of Buddhism, contains the calls for the massacre of the adherents of a different faith. Sri Lanka Buddhists have demonstrated their readiness to fight for their interests. From 1983 to 2009 the country has been marred in the war between Buddhists and the Hindu Tamils, with the Buddhists prevailing.

"During the war they purchased more land and have gained more political power, more influence on the executive power and mass media," he told Sputnik.

He says he is fighting against halal certification of food products, which many of his allies see as a "preparation of the imposition of Sharia law."

In conclusion, Withanage told Sputnik that he is sure that the confrontation between Buddhists and Hindus in Sri Lanka is one of the main reasons why there are so many Muslims in his home country.