Belgrade Under Pressure Over Status of Russian-Serbian Humanitarian Center 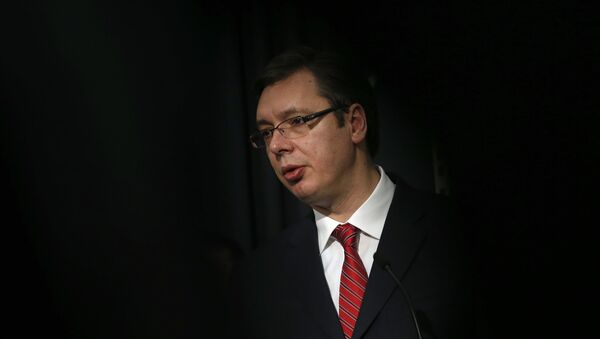 © AP Photo / Darko Vojinovic
Subscribe
International
India
Africa
The Serbian president told Sputnik that the government was under pressure over the status and the provision of diplomatic immunity to the staff of the Russian-Serbian Humanitarian Center.

Plane Drops Humanitarian Aid in Deir ez-Zor - Russian Reconciliation Center
BELGRADE (Sputnik) — Belgrade is under pressure over the status and the provision of diplomatic immunity to the staff of the Russian-Serbian Humanitarian Center in the Serbian city of Nis, Serbian President Aleksandar Vucic told Sputnik on Sunday.

"For me, it is difficult to talk about everything. But everybody knows that we are in a difficult situation. The government will take a decision on this matter… Whatever the government decides in this regard, it will be an unfair and unjust decision or otherwise we will face other consequences," Vucic said.

In late June, during the visit to Serbia, Russian Deputy Prime Minister Dmitry Rogozin, said that it was necessary to register the center and provide it with diplomatic immunity as any other organizations working in Serbia or otherwise there was no need to keep the center operating.

The agreement on providing the diplomatic immunity to the personnel of the center was supposed to be signed during the visit of Russian President Vladimir Putin to Serbia in October 2014, but the Serbian side withdrew it from agenda.

The Russian-Serbian Humanitarian Center was set up on the basis of a cooperation agreement between the Russian and Serbian governments on April 25, 2012. It is tasked with tackling emergency situations, including firefighting, providing humanitarian assistance to people affected by disasters, implementing joint projects and programs, training programs on emergency situation prevention, testing and demonstrating rescue technologies.