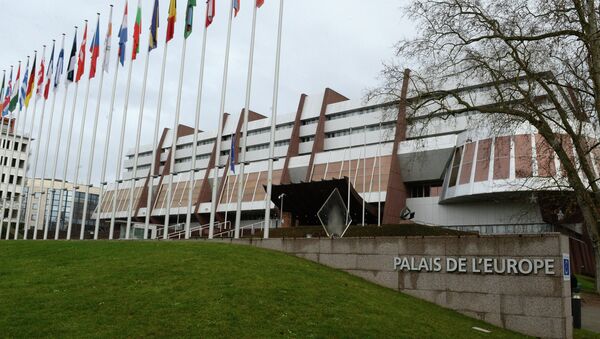 Russophobic Sentiment Prevalent Among PACE Lawmakers - Agramunt Representative
MOSCOW (Sputnik) – The June session of the Parliamentary Assembly of the Council of Europe turned into a triumph of antidemocrats and Russophobes with each day of the session being marked by double standards, Russia's lower house of parliament international affairs committee chair Leonid Slutsky said.

On March 20, PACE President Pedro Agramunt, along with a group of Russian lawmakers, arrived in Syria for a private visit, during which he held a meeting with President Bashar Assad without the intention of representing the Assembly. The move prompted PACE lawmakers to propose a no-confidence vote.

"The June PACE session turned into the triumph of antidemocrats and Russophobes. Each day was marked by double standards and decisions contrary to the common sense," Slutsky said on Friday.

He pointed out that the impeachment for PACE President Pedro Agramunt was not in line with the principles of parliamentarism as well as common sense.

Slutsky said that Agramunt had jeopardized his life visiting Syria, which is the main source of terrorist threat for Europe.

"But this visit was assessed not from the perspective of the antiterrorist cooperation but in the context of the joint trip with the Russian State Dume delegation, which caused the heavy negative reaction of the Russophobes on the Strasbourg platform," Slutsky said, adding that Russia will continue to support the PACE head.

He also slammed PACE for blocking creation of a new political group, which was going to include lawmakers from 12 countries including France, Monaco, Spain, Italy, Serbia, Turkey and Azerbaijan.

"The group was labeled ‘pro-Russian’ and because of that its formation was blocked," the Russian lawmaker added.

Russia left PACE in late 2015 following the assembly's resolutions in 2014 and 2015 depriving the Russian delegation of the right to vote at the assembly’s sessions, as well as of the right to participate in the work of its three key bodies: the Bureau, the Presidential Committee and the Standing Committee over Crimea's secession to Russia.

Russia did not renew its credentials ahead of the Assembly’s 2016 and 2017 winter sessions and made its return conditional on the full restoration of its delegates' voting rights. Earlier on Friday, Russian Foreign Minister Sergey Lavrov informed Secretary General of the Council of Europe Thorbjorn Jagland of Moscow's decision to suspend the country's 2017 contribution to the Council of Europe.