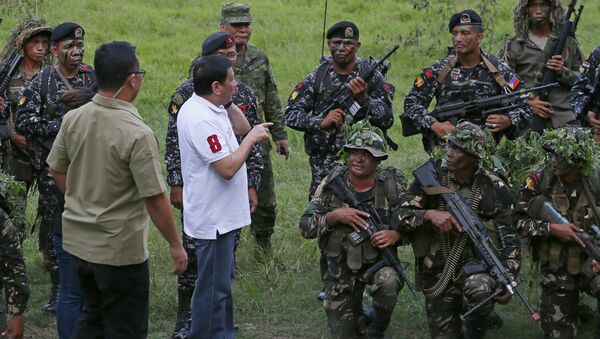 China has supplied a batch of weapons to the Philippines to support President Rodrigo Duterte’s crusade against Islamist terror groups in Marawi, after Duterte proclaimed that he would seek assistance from sources other than the United States.

Daesh-Linked Militants Attack Town in Southern Philippines, Occupy School
A shipment of assault and sniper rifles was delivered to the Philippines from China on Wednesday as a gesture of assistance in the fight against the Abu Sayyaf and Maute terrorist groups that took control of the Philippines city of Marawi last month. Both groups have pledged allegiance to Daesh.

The donation, reportedly worth $7.35 million, "highlights the new era in Philippine-Chinese relations," according to Duterte, who earlier pledged to turn to China and Russia for assistance instead of the United States.

"We are almost on bended knees sometimes because of lack of equipment. It is a good thing we have a good friend like China who is very understanding," Duterte said during a ceremony in which he recieved the shipment.

Chinese Ambassador to the Philippines Zhao Jianhua, who formally handed over the weapons, said a "second batch" of weapons is going to be delivered soon.

"The donation is not big but it is big in the sense that it marks a new era in relations between our two militaries," the ambassador said.

The following day, Chinese Foreign Minister Wang Yi said China is going to continue to provide the Philippines with "necessary assistance," during a visit by his counterpart, Alan Peter Cayetano.

"Yesterday the first batch of emergency assistance was delivered to the Philippines," the minister said. "In the future, in keeping with the Philippines' needs, we will continue to provide necessary assistance and help," he added.

The ambassador also pledged to provide support for reconstruction efforts in Marawi.

Nearly 400 people have been killed, including 290 militants and 70 troops, after a large group of Daesh-linked militants took over Marawi, a city on the southern island of Mindanao. Most of Marawi's 200,000 residents have fled and much of the city is in ruins, officials say.

The whole island is currently under martial law, which Duterte says he won't lift until the island is safe.