Armenian Ambassador to US Seeks Trump-Sargsyan Meeting in 2017 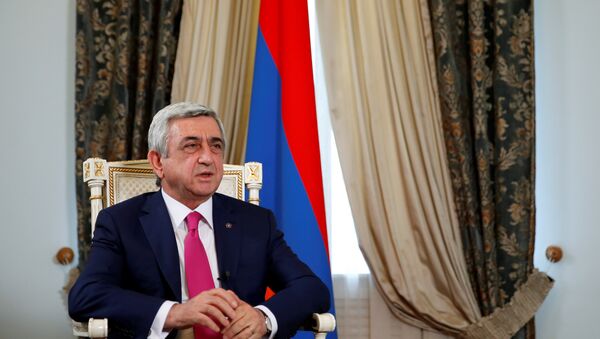 © REUTERS / David Mdzinarishvili
Subscribe
Armenian Ambassador to the United States said he would like to see a meeting between his country’s President Serzh Sargsyan and Donald Trump.

Armenia to Host CSTO Interaction-2017 Drills on October 9-13
WASHINGTON (Sputnik) — Armenian Ambassador to the United States Grigor Hovhannissian told Sputnik he would like to see a meeting between his country’s President Serzh Sargsyan and US President Donald Trump take place sometime this year.

When asked whether he expected the meeting between the two leaders to take place in 2017, Hovhannissian said, "Of course, I would like that. But everything will depend on the agenda and on how the ministers agree on."

Hovhannissian noted that there has been a discussion about such a meeting and the two sides should be preparing for it.

"First, we should organize a meeting at the level of foreign ministers to prepare an agenda, and then we will be preparing a meeting of the Presidents," the ambassador stated.

Hovhannissian explained there was a pause of several years during the previous US administration in holding meetings at the highest level, except for regular meetings within the framework of summits.

"Now, we, the diplomats, should organize that meeting, especially now, when Armenia is going through the process of becoming a parliamentary republic," Hovhannissian said.