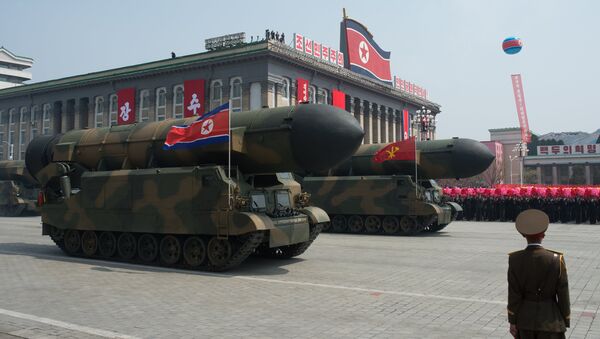 © Sputnik / Iliya Pitalev
/
Go to the mediabank
Subscribe
International
India
Africa
North Korean Ambassador to the United Nations Kim In Ryong said that North Korea is not going to succumb to pressure of the United States and its allies and will persist in building its nuclear program.

Asia
North Korea Vows to Give Former South Korean President a ‘Miserable Dog’s Death’
UNITED NATIONS (Sputnik) — North Korea is not going to succumb to pressure of the United States and its allies and will persist in building its nuclear program, North Korean Deputy Ambassador to the United Nations Kim In Ryong told the UN Security Council.

"What the Korean people came to conclusion… is that the only way out for defending their vital rights and sovereignty is to react to the nukes in kind," Ryong said on Wednesday. "No matter what others say, whatever sanctions, pressure and military attack may follow, we will not flinch from the road to build up nuclear forces which was chosen to defend the sovereignty of the country and the rights to national existence."

He argued that North Korea perceives nuclear force as guarantee for peace on the Korean peninsula while the United States is the "chief culprit" that renders the situation in the region extremely difficult, including by deploying the Terminal High Altitude Area Defense (THAAD) system in South Korea.

Calls for dialogue are pointless, he added, so long as the United States continues to apply pressure against North Korea establishing "unjust preconditions" for negotiations.

In early June, the UN Security Council unanimously adopted a resolution that extended the existing sanctions, travel ban, and asset freezes imposed on North Korea. The decision was made in response to North Korea’s repeated ballistic missile tests.