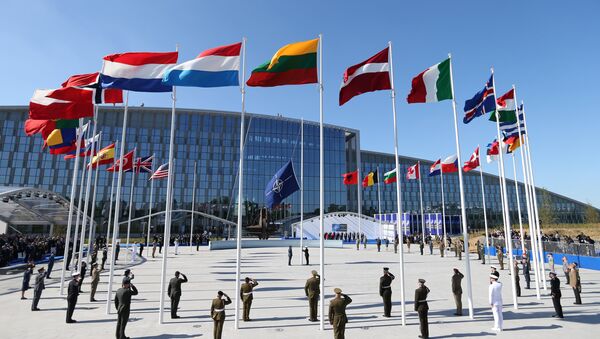 © REUTERS / Christian Hartmann
Subscribe
Russia has achieved considerable across-the-board progress in the military field the chairman of NATO’s Military Committee, Petr Pavel, admitted in an interview with Politico, confirming that Russia’s growing military has driven NATO to see it as a potential threat.

He said that Russia was developing new types of conventional and nuclear weapons and is able “to deploy troops for long distance and to use them effectively quite far away from their own territory."

“We face a huge modernization of the Russian military,” General Pavel added.

Noting that even though he had no reason to describe the Russian leadership’s intentions as aggressive, he added that Russia’s growing military prowess was undeniable — even if its intentions were “unclear.”

“So we take this even potential threat very seriously,” Pavel stated.

In an interview with Sputnik, Moscow-based foreign policy expert Dmitry Ofitserov-Belsky said that NATO officials normally say such things before they start discussing their military budget.

NATO Unsure About Russia’s ‘Aggressive Intent’ - Military Committee Chairman
“During his election campaign President Trump said he would cut America’s defense spending, but it looks like they will not let him do that. Talking about a more assertive Russia is the only way to [to keep defense outlays up]. The NATO leadership is trying to convince the member-states to spend more on defense. The Czech Republic, Bulgaria, Romania and others, especially in Eastern Europe are not eager to splurge on arms and raising fears of an imaginary ‘Russian aggression’ is the only way to make them pay up,” Ofitserov-Belsky noted.

Russia and NATO remain in touch

Still, despite the current cool in relations, Russia and NATO haven’t stopped talking to each other.

On Monday, Russia’s Deputy Prime Minister Dmitry Rogozin shared with Sputnik his impressions of the meeting he had earlier had with NATO’s Deputy General Secretary Rose Gottemoeller during the inauguration of the new Serbian President Alaksandar Vucic.

“There were many other officials present [at the inauguration] and even though these people have sanctioned me I still had a long chat with Rose Gottemoeller,” Rogozin said without elaborating.

NATO to Seek Good Relationship With Russia - Deputy Secretary General
Last week NATO said that it was discussing with Russia the possibility of a new meeting of the Russia-NATO Council.

“All these preparations that are now being implemented in practice, when NATO infrastructure approaches our common borders, when new units are sent there… we understand perfectly well that the pretexts used to justify such actions are far-fetched," Lavrov said in an interview with Belarusian media.

He added that Russia had no plans whatsoever to attack any member of the North Atlantic Alliance.

"I still have a high opinion of the quality of military thinking, military training in the United States, Germany, the United Kingdom and other countries of the North Atlantic alliance. I can’t believe that they have even the slightest assumption that Russia will attack NATO," Lavrov emphasized.

Sergei Lavrov noted that the current deployment of NATO infrastructure in Eastern Europe reflected its desire to “fill the void” it believes was left behind by the 1991 Soviet breakup.