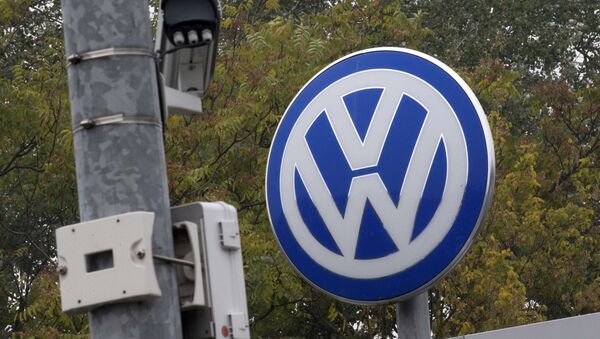 © REUTERS / Axel Schmidt
Subscribe
International
India
Africa
The staff of the Volkswagen Slovakia plant in Bratislava reached an agreement on salary rise with the enterprise's authorities and ceased the strike, an administration representative told Sputnik on Sunday.

PRAGUE (Sputnik) — On Monday, during the 12th round of talks between the managers and workers, the trade union rejected the proposal of the factory's management on growth of salaries by 4.5 percent in 2017 and by 4.2 percent starting from January 2018 instead of 16 percent that it demanded. On Tuesday, the workers announced an industrial strike for an indefinite period. The following rounds of talks did not bring any results either.

"The talks between the plant's management and the trade union were successfully completed on Sunday evening. An agreement on signing a new collective labor contract for a term of two years was reached," the administration representative said.

Volkswagen Will Have to Pay $2.8Bln Over Emissions Cheating in US
The plant's staff called for fair payments, stressing that the Volkswagen employees in Germany gained much more money for the same kind of work. The average salary of a Volkswagen Slovakia plant employee amounted to $2,014 per month, while the staff of the Volkswagen factory, located in Germany, received $5,037 monthly.

About 8,500 out of 12,300 plant workers in Slovakia voted in a written form in support of stopping the conveyors. The production of offroaders and luxury-class cars has been stooped, while the production of small cars is restricted.