Unable or Unwilling? Why the US and Its Coalition are Bogged Down in Mosul 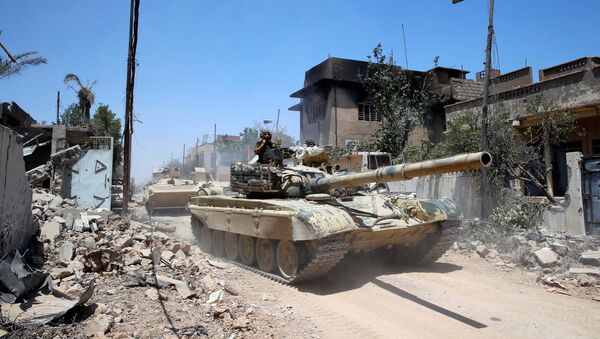 © REUTERS / Erik De Castro
Subscribe
On Sunday, Iraqi forces began storming the Daesh-held Old City of Mosul in an assault they hope will be the last in the eight-month-old campaign to seize the militants' stronghold. One Russian military expert commented to Sputnik on why the US and its coalition have been bogged down there while a Peshmerga representative said what will happen next.

"Iraqi forces early this morning breach into old Mosul, the final ISIS (Daesh)-held district in the city," Brett McGurk, the US Special Presidential Envoy to the international coalition fighting Islamic State (Daesh), said on Twitter on Sunday. "We are proud to stand with them."

The historic district and a tiny area to its north are apparently the only parts of the city still under control of the Islamists. Mosul used to be the Iraqi capital of the group, known as the Islamic State, ISIS, ISIL, Daesh.

Iraqi forces early this morning breach into old #Mosul, the final #ISIS-held district in the city. We are proud to stand with them. #الموصل

​According to Reuters, the Iraqi army estimates the number of Daesh fighters at no more than 300, down from nearly 6,000 in the city when the battle of Mosul started on October, 17.

But the Old City is a densely-populated maze of narrow alleyways and the fighting is slow, bloody and house-to-house.

"This is the final chapter" of the offensive to take Mosul, the agency quotes Lieutenant General Abdul Ghani al-Assadi, senior commander in Mosul of the elite Iraqi Counter Terrorism Service (CTS) units spearheading the assault, as saying.

The US-led international coalition is providing air and ground support to the campaign.

Iraqi Forces Enter Mosul's Old City - US Special Envoy to Anti-Daesh Coalition
An expert from the Association of Military Political Scientists, Associate Professor at the Department of Political Science and Sociology of the Moscow-based Plekhanov Russian University of Economics Oleg Glazunov commented to Radio Sputnik on why the offensive with the support of the US-led coalition has turned into a big problem.

"It is ridiculous to listen to all those speculations about Mosul. The US has announced so many times that it was ready to recapture it, however it still is unable to finish squeezing the terrorists from the Old City," he told Sputnik.

The military political scientist further elaborated on the inability and failure of the US army and the US-led coalition.

"The budget of the US Armed Forces is $600 billion. For comparison, Russia's military budget is $60 billion. Russia is successfully assisting the Syrian army to free its territories from terrorists, while a lot more forces are operating in Iraq: the US-led coalition, plus the Kurds, the Turks and many more.  However they are still unable to fully free this Mosul," he told Sputnik.

Iraqis Explain Why Campaign to Liberate Mosul Has Lasted Eight Grueling Months
Glazunov said that ineffective actions of the international coalition have a negative impact on the image of the US Armed Forces.

"It is still unclear whether they are unable or unwilling. If we look at the Old City, everyone who has been to the Middle East will agree that it is very hard to free it due to its narrow streets and extensive network of its underground walkways. However it is impossible to linger its liberation any longer," he said.

Meanwhile official Iraqi Kurdish Peshmerga representative General Helgurd Hikmet told Sputnik Turkiye that after complete liberation of Mosul from Daesh, the Iraqi government forces together with Hashd al-Shaabi forces, also known as the Popular Mobilization Units (PMUs) and Peshmerga units of Iraqi Kurdistan are planning to launch a joint operation on the liberation of the town of Havice in Kirkuk province, to the south of Mosul, from Daesh.

Humanitarian Crisis in Mosul Sinks to UN's ‘Worst-Case Scenario’
"Daesh militants are fleeing Mosul in the direction of Havice. This town is an important strategic center for Daesh, where there are a lot of militants and civilians. We are preparing to launch an offensive on the liberation of the town right after the complete liberation of Mosul," he told Sputnik.

Havice, he said, is of vital strategic importance to the Iraqi Kurdistan due to its territorial proximity to Kirkuk. Daesh presence in Havice poses certain threat to the province of Kirkuk, which will be eliminated once the town is fully liberated from terrorists.

Havice, which is located 40 kilometers to the west of Kirkuk, was captured by Daesh in 2014.