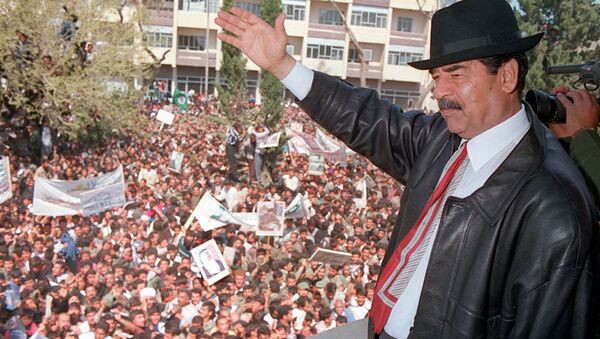 Condoleezza Rice: US Invaded Iraq to Oust Saddam Hussein, Not to Bring Democracy
WASHINGTON (Sputnik) — Russian President Vladimir Putin said in an interview with US filmmaker Olive Stone that George H. W. Bush, who served as US president from 1989 to 1993, was right not to seek Saddam Hussein's ouster after Iraq invaded Kuwait in 1990.

"Back then the United States did not go further – they did not overthrow the government in Iraq … And others say everything was done correctly, they had to stop at the right moment. And President was quite right to do what he did, he was cautious. He responded to aggression and then stopped when the time was right," Putin said, as quoted in the book "The Full Transcripts of the Putin Interviews," released Friday.

The Russian president stressed that the Iraq War, which unfolded with the US-led coalition’s invasion to Iraq in 2003, under the presidency of Bush’s son George, and a subsequent capture and the execution of Hussein was a "mistake."

In 1990, a conflict flared up in the Persian Gulf region. Hussein accused neighboring Kuwait of siphoning off his country’s crude oil from disputed Rumaila oil field. After Kuwait denied the accusation, Iraqi forces occupied the country. On January 17, 1991, US-led coalition forces launched Operation Desert Storm, also known as the Gulf War. As a result, the anti-Iraqi coalition accomplished its strategic objectives, expelled Iraqi forces from Kuwait and reinstated the country’s sovereignty. However, the regime of Hussein and the Iraqi military potential remained largely intact.

The book "Full transcripts of the Putin Interviews" covers the conversations between Stone and Putin, which were initially released in the US filmmakers’ four-episode documentary series, "The Putin Interviews." The series premiered Monday on Showtime networks.