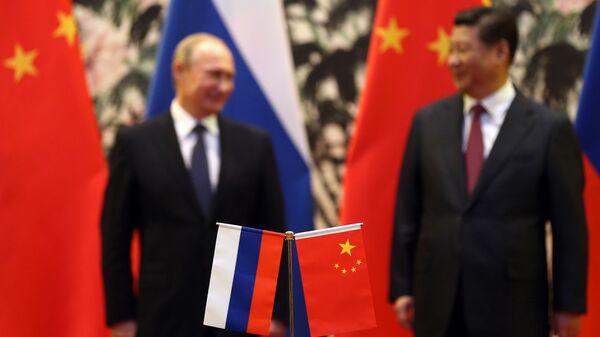 The anti-Russian sanctions have strengthened cooperation between Moscow and Beijing, which has started long before the deterioration of relations with the West, Russian President Vladimir Putin said in an interview with US film director Oliver Stone.

WASHINGTON (Sputnik) — On Friday, Stone released the transcript of his interviews with the Russian leader recorded between 2015 and 2017 that had been aired by the Showtime television network earlier in the week. Putin's quotes are given in the translation from Russian into English used in the transcript.

"We've been long pursuing that purpose and the so-called sanctions introduced by the West, they simply pushed this process forward. Apart from what you know, we also have plans for developing the so-called Trans-Siberian Railroad, the Baikal Railroad, and it all corresponds well to the Chinese plans of reviving the Silk Road. So, on the whole, we have very harmonious relations which are complimentary to each other," Putin said answering Stone's question if the sanctions contributed to improvement of Moscow-Beijing ties.

Relations between Russia and the Western countries have deteriorated since 2014 after the West imposed sanctions against Moscow for its alleged meddling in the Ukrainian conflict. At the same time, Russia has taken steps to develop cooperation with China in a number of spheres, including defense finances, nuclear energy and transport among others.

US Promotes Anti-Russian Sanctions Fearing a 'Loss' if It Steps Back
Vladimir Putin also said that Russian farmers should thank former US President Barack Obama for the sanctions, as Russian countermeasures contributed to the development of the country's agriculture.

The policy of import substitution implemented by the Russian authorities brings results and is rather successful, Putin added.

"This strategy doesn't seek to eliminate imports. It seeks to create the manufacturing of high technology products inside the country. In the past we could buy anything using the oil money. But that was undermining the stimulus for internal development. And right now the government is trying to support high technology industries, to help both defense and civilian industries. And I have to say that we are achieving success in that regard," Putin said, speaking about the government policy of import substitution.