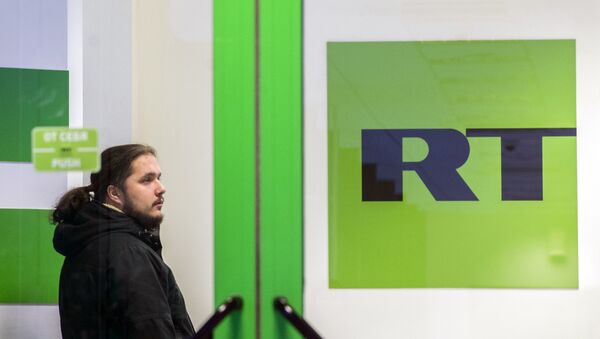 © Sputnik / Evgeny Biyatov
/
Go to the photo bank
Subscribe
Lee Camp, a host of the RT America broadcaster, found a total of 15 "lies and distortions" in an article of The New York Times media outlet, written about him.

RT America Nominated for National Emmy News Award in US - Chief Editor
MOSCOW (Sputnik) — On June 7, the US news outlet published an article by Jason Zinoman, called "An American Comic on a Russian Channel: What He Avoids Speaks Volumes."

On Tuesday, Camp published his own article "How to Write Propaganda for the NY Times — As Demonstrated in an Article About Me," in which he listed 15 "lies, manipulations, and false implications," in the AlterNet magazine.

"At first when you’re the center of a smear job, you’re annoyed and frustrated. But as I read further through the piece, I realized it was a master class in how to write propaganda for one of the most "respected" news outlets in our country. I’m actually grateful it was written about me because now I can see with my own eyes exactly how the glorious chicanery is done. I count no less than 15 lies, manipulations, and false implications in this short article, a score that even our fearless prevaricator-in-chief Donald Trump would envy," Camp said in the article, before analyzing Zinoman's text.

On Friday, RT's Editor-in-Chief Margarita Simonyan said on her Twitter account that the RT America host found a lot of "fakes" in The New York Times' "delightful text."

Camp quotes part of Zinoman's article about former RT journalist Liz Wahl "who quit on air, accusing the network of "whitewashing the actions of Putin" in its coverage of the Russian invasion of Ukraine, who called Camp a "stooge." According to The New York Times' author, Wahl was working at RT when Camp's "Redacted Tonight" show was launched.

RT America Head: Detained Reporter Followed All Standards While Covering Riots
According to the RT America host, this piece of the article is not true.

"Liz Wahl was not working at RT America when Redacted Tonight premiered. Liz Wahl quit on March 5, 2014. Redacted Tonight first aired at the end of May, 2014. So, you know, at least Wahl and Zinoman were only about three months off," Camp said in his article.

RT America's host added that such "egregious mistakes" of Zinoman's could easily be checked even with the use of Wikipedia, and "don’t just speak to the sloppy work of the author, they also speak to his eagerness to portray me and my show in a certain light."

Yet another part of Zinoman's article said that Camp had dedicated six minutes of his show "to the discredited conspiracy theory that it wasn’t Russian hackers who leaked emails during the presidential election but Seth Rich, the Democratic National Committee staff member killed in a botched robbery."

Camp asked the readers of the article if they thought that he had backed the "discredited nonsense theory about the death of DNC staffer Seth Rich" after reading the text of Zinoman.

The US host said that in a speech on "Redacted Tonight" that he cast doubts about Rich's murder being because of the leaked emails and proposed everyone to have a look at his show's record.

000000
Popular comments
Seth Rich was the leaker, and he was murdered for it.