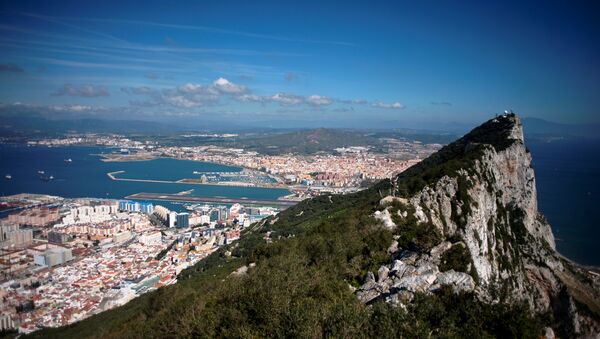 Maintaining a "fluid" border with Spain is crucial for Gibraltar from the economic point of view, its deputy chief minister told Sputnik.

GIBRALTAR (Sputnik) — Gibraltar, a UK overseas territory located on the tip of the Iberian peninsula, should not close down its border with Spain after Brexit to protect interests of workers, tourists and residents, Deputy Chief Minister Joseph John Garcia told Sputnik.

"The Government is confident about the future of Gibraltar post-Brexit. After the Referendum result we carried out a detailed survey about the impact of Brexit across the entire business of Government and also in the private sector. The analysis has made it clear to us that that a fluid border between Gibraltar and Spain is very important to the economy on both sides of the frontier," Garcia said.

According to the deputy chief minister, a fluid border was important for "workers, tourists and residents on both sides."

The minister said that 12,000 Spanish residents were crossing the border daily to work in Gibraltar, the majority of them Spanish nationals, but some of them citizens of other EU countries.

"Bear in mind also that Gibraltar accounts for 25% of the GDP of the neighbouring region of Spain and that Gibraltar as a whole is the second largest employer for the whole of Andalucia, after its regional Government," Garcia said.

The deputy chief minister added that research carried out by the local government found out that over 90 percent of Gibraltar's business in financial sphere was with the United Kingdom rather than the European Union.

"The UK has already guaranteed that at the very least the existing level of access to the UK market will continue. This has served to reassure the industry that nothing will change – Brexit or no Brexit," Garcia said.

UK to Defend Interest of Gibraltar After Brexit

The United Kingdom is most likely to protect the interests of Gibraltar after Brexit despite Spain’s pressure and continuing claims over the UK overseas territory's sovereignty, Garcia told Sputnik.

"There is nothing we have seen to date to indicate that the UK will not protect the interests of Gibraltar. Indeed, we have had access to the UK Government at the highest level since the referendum took place and they have listened to our concerns and taken them on board," Garcia said.

Garcia criticized Spain’s position of trying to use Brexit to make progress on its "outdated claim" to Gibraltar.

"It is Madrid that is seeking to complicate an already complicated matter. You may recall that the previous Foreign Minister Mr Margallo stated that the only way forward for Gibraltar was to share its sovereignty with Spain… We therefore need the United Kingdom to keep a watchful eye over what Spain may try to do during the negotiating period. Here in Gibraltar we have learnt the lessons of history well and we will not let down our guard," Garcia stressed.

Garcia explained that Gibraltar would not agree to UK-Spanish joint sovereignty over the territory but would rather cease being a non-self-governing territory and exercise the right to self-determination in conformity with the principles of the UN Charter.

The European Union's decision to give Spain veto power over Gibraltar's role in any agreements between the bloc and the United Kingdom made after Brexit is a "slap in the face," Garcia told Sputnik.

"The double-veto accorded to Spain over Gibraltar in the EU negotiating guidelines was a slap in the face to the 96% pro-European people who voted to remain in the European Union [in the Brexit referendum in June 2016]," Garcia said.

Garcia said that adding the veto right was unnecessary given that "all Member States enjoy a veto over everything anyway."

"It would be a huge irony if the European Union, that likes to preach about human rights, freedom and democracy, were to sanction the trampling over the rights of the people of Gibraltar at the behest of one of its own Member States," the deputy chief minister said.

Rock of Discord, or Gibraltar's Future Amid Brexit Changes
Gibraltar, a UK territory located in the south of Spain and claimed by the latter, became the source of renewed tensions between Madrid and London after Brussels suggested in March that Spain could be granted a veto right over Brexit terms concerning Gibraltar.

The European Union later decided not to include the issue of Gibraltar to its guidelines on negotiations for the United Kingdom's departure from the bloc.

In February, Spanish Prime Minister Mariano Rajoy offered joint sovereignty over Gibraltar, so that its residents were not left without access to the EU single market.

Spain and the United Kingdom have been contesting the territory for over 300 years. In 1967 and in 2002, local residents rejected the idea of joining Spain in referendums.