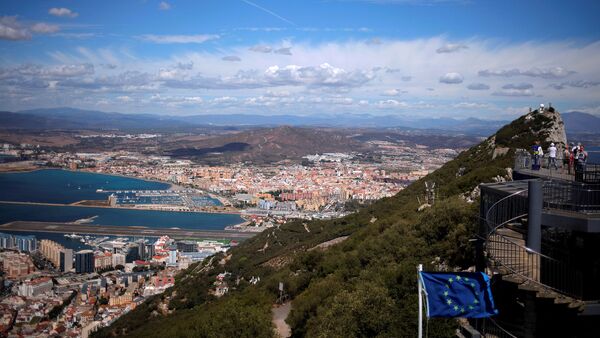 The negotiations on the UK withdrawal from the European Union are expected to start on June 19. However, the issue of Gibraltar, which is the only UK overseas territory in the 28-nation bloc, will barely be discussed at the talks.

Gibraltar's Dilemma: What Awaits British Overseas Territory After Brexit?
Dozens of thousands of people and hundreds of cars cross the border line, which is dubbed "verja" (a fence), by the Spaniards, on a daily basis. At the moment the border control does not hinder the movement of people, who move through the two checkpoints with passports in their hands.

About 12,000 of the people crossing the border line are Spanish citizens working in Gibraltar and the majority of them live in the town of La Linea De La Concepcion, one of the poorest in the southern European country. Unemployment rates in the Spanish town exceed 30 percent and workplaces in Gibraltar are sometimes the only way for its residents to survive.

"The unemployment rate in Gibraltar is about 3 percent and here it is 33 percent. There are no such income gaps [in the settlements divided by only one border] in the European Union. Now we have more than 8,500 unemployed people of working-age population, but it has grown up to 11,000 during the crisis. The border is crossed by more than 10,000 and the majority of them live in La Linea De La Concepcion," Juan Franco, the town's mayor, said.

The official added that there is potential for Brexit to become "both a catastrophe and an opportunity" for the Campo de Gibraltar region in the Spanish province of Cadiz, bordering Gibraltar.

"Campo de Gibraltar is the poorest Spanish region. The government should open eyes and look at what is going on here. Maybe Madrid should understand that one of the ways is to return Gibraltar to Spanish sovereignty so as to create conditions for the residents of Gibraltar to want become a part of Spain," Franco said.

However, the residents of the UK overseas territory would barely express a will to become Spanish citizens. Inhabitants of the overseas territory have voted in two referendums on its sovereignty in 1967 and in 2002, that resulted in a rejection of proposals to unite with Spain. In 1967, the referendum resulted in closure of the border that was lifted only in 1985 after the death of former Spanish dictator Francisco Franco.

This is How EU Could Use Gibraltar Issue to Make Britain Pay Up Over Brexit
Gibraltar Chamber of Commerce Chief Executive Edward Macquisten said that the move of Madrid became a symbol of the divisions in Europe shortly before the fall of the Berlin Wall.

The border would hardly be closed, but the officials from the two sides could complicate the procedure of border crossing.

Manuel Triano, the president of the Cross Border Group that unites companies and trade unions both from Spain and Gibraltar, said that the group had already made local authorities ease border crossing procedures and the region would face difficulties if the "verja" became a border wall.

War of Flags and Words

Madrid returned to the issue of joint sovereignty of Gibraltar soon after the Brexit referendum in 2016. More than 95 percent of voters from the overseas territory (controlled by London since 1713 after the Treaty of Utrecht was signed) opposed the withdrawal from the European Union.

Third of Brits Ready to Swap Some Sovereignty Over Gibraltar for Better EU Deal
Soon after the announcement of the referendum results then-Spanish Foreign Minister Jose Manuel Garcia-Margallo reiterated the idea of sharing sovereignty over Gibraltar with the United Kingdom if Britain decided to leave the 28-nation bloc, saying that it would allow Gibraltar to maintain access to the EU single market.

Chief Minister of this UK overseas territory Fabian Picardo said that Gibraltar would not agree to this proposal. Garcia-Margallo said that he would raise the Spanish flag over Gibraltar, sooner than Picardo could even imagine.

Soon after this discussion several members of the Spanish right-wing VOX Party displayed a Spanish flag from the top of the Rock of Gibraltar.

In spring 2017, the quarrel escalated once again after Brussels backed Madrid. The European Union announced that the issue of Gibraltar would not be on the agenda of the forthcoming Brexit talks. Brussels added that Madrid would be able to veto extension of any agreements that would be reached with the United Kingdom after Brexit.

Brexit Britain, Gibraltar and Delusions of Imperial Grandeur
Following this statement, Picardo said that European Council President Donald Tusk behaved himself as "a cuckolded husband who is taking it out on the children," according to the Sky News broadcaster. UK Defense Secretary Michael Fallon said that London would protect the residents of the overseas territory by any means. Former Tory leader Michael Howard said that the UK prime minister would be prepared to go to war to protect Gibraltar as former Prime Minister Margaret Thatcher once did for the Falklands.

In the course of the conflict, in April, the Gibraltar government said that the Spanish patrol ship Infanta Cristina entered  Gibraltar's territorial waters. The Spanish Foreign Ministry said that the ship was in the Spanish territorial waters, as Spain does not recognize any other rights of the United Kingdom concerning the waters near Gibraltar apart from those enshrined in the 10th article of the Treaty of Utrecht.

At the same moment the sides aim to reach a consensus on the issue and make attempts to prevent potential escalation. Spanish Foreign Minister Alfonso Dastis said that representatives of the overseas territory should be part of the UK delegation at the Brexit talks, adding that Madrid had not called its proposal about the joint sovereignty away, but also did not make attempts to impose its will on Gibraltar.

Gibraltar is quite attractive for foreign businesspeople and investors, mostly in the spheres of finances, insurance, online games and e-commerce. Due to low taxes, Madrid considers Gibraltar as an offshore zone, however local authorities reject these characteristics, citing the international agreement on exchange of financial information signed by Gibraltar.

Macquisten said that that the majority of the businesses in these spheres had evolved due to the open borders with Spain.

"All of these different businesses have evolved, over the last 15-20 years in particular. And the Gibraltar economy could not have developed if that frontier had not remained open for people to come and go," he added.

The official additionally said that if the border closed, local residents would make attempts to find new markets.

"We are not here waiting for… what Spainiards can do. This is a small community… and it is a trading community, because we manufacture nothing, because we have no natural resources… The natural resource of Gibraltar is the trading mentality to look for opportunities… If one market closes… you have no choice if you want to survive, you have to go out to find new markets," Macquisten added, speaking about prospects of Gibraltar if London and Brussels would not reach an agreement about the future of the Rock.

Speaking about potential exodus of companies from Gibraltar after Brexit, the official from the Gibraltar Chamber of Commerce added that it was too early to make predictions on the issue.

"It is too early to say that some companies will leave or will stay. Some companies might leave," the official said, adding that several companies had business licenses not only in the EU member states and relocation of their business activities to other countries could be very expensive for them.

The Gibraltarian deputy chief minister said that the Brexit referendum had not felt a negative impact on the economy of the Rock.

"The economy of Gibraltar continues to grow and we continue to receive applications to license entities who want to establish themselves in Gibraltar. In this sense, there has been no negative impact as a consequence of the decision to leave the EU. Our analysis has shown that over 90% of our business in financial services is with the United Kingdom and not with the European Union. The UK has already guaranteed that at the very least the existing level of access to the UK market will continue. This has served to reassure the industry that nothing will change – Brexit or no Brexit," Joseph John Garcia told Sputnik in an interview.

At the same time, not everyone is quite as optimistic over the issue. By March 2019 the United Kingdom would not be part of the European Union and the future status  of Gibraltar residents, as well as of people living in Spain near the Rock, is still shrouded in a fog that is not unusual in London.