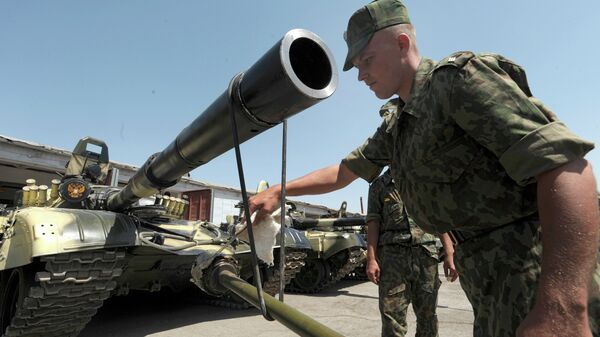 Russia is reinforcing its military bases in Tajikistan and Kyrgyzstan with modern weapons in a bid to prevent the import of terrorism from Afghanistan into Central Asia, Defense Minister Sergei Shoigu said when meeting with his colleagues from the Shanghai Cooperation Organization (SCO) in the Kazakh capital Astana on Wednesday.

“We are alarmed by the growing presence in Afghanistan of Daesh militants whose number now exceeds 3,500. The terrorist group’s ongoing effort to establish an Islamic caliphate poses a serious threat to the security of Afghanistan and its neighbors,” Shoigu said.

Russian Military Bases Abroad: Facts and Details
The situation in Afghanistan is worsening every day with the Taliban, which now controls most of the country’s rural areas, now advancing on the big cities. Daesh too has been consolidating its positions in the war-torn country.

Afghan President Ashraf Ghani said on Saturday that Taliban fighters have “one last chance” to agree to a ceasefire. However, chances for a peaceful resolution of the crisis look slim.

With the US-led Western coalition having failed to restore peace in Afghanistan, Russia is supplying its military bases in Tajikistan and Kyrgyzstan with modern weapons and is strengthening cooperation with its SCO partners.

With an estimated 10,000 jihadist militants currently amassed along Afghanistan’s 1,300 km border with Tajikistan, Russia’s 201st military base is a major guarantor of the country’s security.

The 7,500 soldiers stationed at the base, located in Dushanbe and Kurgan-Tyube, were recently enforced with Uragan 220 mm multiple rocket launchers with an effective firing range of up to 35 kilometers.

Simultaneously, Russia sent in several batteries of its Iskander-M tactical missile systems for participation in the Dushanbe-Antiterror-2017 joint military exercises.

Unlike Tajikistan, Kyrgyzstan has no shared borders with Afghanistan. Still, the terrorist threat is being felt there just as much as it is in neighboring Tajikistan.

The country is also politically unstable and its armed forces are among the world’s weakest. Small wonder that the four Russian military bases – an airbase of the Collective Rapid Reaction Forces of the Collective Security Treaty Organization in Kant, a naval station in Karakul and a military communications center in Mailuu-Suu — are a major stabilizing factor in the country.

Russia is building its relations with the Central Asia nations on the basis of shared interests and goodwill.

World
Shoigu: West Unable to Overcome Differences, Ensure Single Anti-Terror Front
Sergei Shoigu earlier described the Russian military bases in Tajikistan and Kyrgyzstan as “guarantors of regional stability.” “Together with our allies we are boosting their combat capability which, in turn, ensures the security of [their capitals] Dushanbe and Bishkek,” Shoigu said in Astana.

RIA Novosti’s Alexander Khrolenko believes that the time and place of the SCO defense ministers’ meeting earlier this week was by no means coincidental.

“Terrorism knows no borders and the SCO member-states are working together to preempt the terrorists’ actions,” Khrolenko wrote.

“If the collective West is unable to leave its differences behind and form a common front against international terrorism, maybe the collective East will be able to do the job?” he added.

The SCO is an intergovernmental international organization, established on June 15, 2001 in Shanghai by Kazakhstan, China, Kyrgyzstan, Tajikistan,

Russia and Uzbekistan. At the summit in Uzbekistan in June 2016, the SCO leaders signed memorandums on the accession of India and Pakistan to the organization.