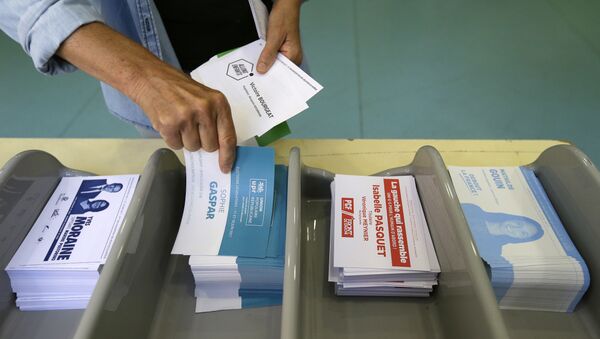 © AP Photo / Claude Paris
Subscribe
The first round of the France’s parliamentary election on Friday saw a significant decrease in the participation level compared to the previous votes, the country's interior minister said, as only 48.7 percent of voters came to polling stations to cast their ballots.

MOSCOW (Sputnik) – Over half of French voters did not appear in the polling stations to cast ballots in the first round of the country’s parliamentary election, which took place Sunday, France's Interior Minister Gerard Collomb said.

"The first lesson that we have learned from the current voting is a significant decrease in the participation level, compared to the previous election. According to the data from 91.3 percent of polling stations, the turnout totals 48.7 percent, which means that over a half of voters did not come to vote. We are concerned by this data," Collomb said Sunday.

Collomb noted that the voter turnout was affected by the crisis of confidence of the population in the authorities.

Marine Le Pen Proceeds to 2nd Round of French Parliamentary Vote - Official Data
Collomb also expressed gratitude to the law enforcement service for ensuring the security during the election amid terror threat.

The total of 28.21 percent of French citizens voted in favor of Macron's party, whereas the biggest opposition party, The Republicans, received 15.77 percent of votes and was followed by Marine Le Pen's National Front with 13.2 percent of popular support, the country’s Interior Ministry’s data showed Monday, after all ballots were counted.

On Sunday, French citizens were electing 577 lawmakers to the country's National Assembly, the lower house of parliament, out of more than 7,800 candidates.

000000
Popular comments
if half of the people ignore elections, it's a not a small for what is said a democratic country, nevertheless in US it's a long time this happens...
francescoslossel
12 June 2017, 00:46 GMT
000000
you can lead a horse to water but... or you can fool some of the people, some of the time...
michael
12 June 2017, 02:14 GMT
000000
Newsfeed
0
New firstOld first
loader
LIVE
Заголовок открываемого материала
Access to the chat has been blocked for violating the rules . You will be able to participate again through:∞. If you do not agree with the blocking, please use the feedback form
The discussion is closed. You can participate in the discussion within 24 hours after the publication of the article.
To participate in the discussion
log in or register
loader
Chats
Заголовок открываемого материала
Worldwide
InternationalEnglishEnglishMundoEspañolSpanish
Europe
DeutschlandDeutschGermanFranceFrançaisFrenchΕλλάδαΕλληνικάGreekItaliaItalianoItalianČeská republikaČeštinaCzechPolskaPolskiPolishСрбиjаСрпскиSerbianLatvijaLatviešuLatvianLietuvaLietuviųLithuanianMoldovaMoldoveneascăMoldavianБеларусьБеларускiBelarusian
Transcaucasia
ԱրմենիաՀայերենArmenianАҧсныАҧсышәалаAbkhazХуссар ИрыстонИронауОssetianსაქართველოქართულიGeorgianAzərbaycanАzərbaycancaAzerbaijani
Middle East
Sputnik عربيArabicArabicTürkiyeTürkçeTurkishSputnik ایرانPersianPersianSputnik افغانستانDariDari
Central Asia
ҚазақстанҚазақ тіліKazakhКыргызстанКыргызчаKyrgyzOʻzbekistonЎзбекчаUzbekТоҷикистонТоҷикӣTajik
East & Southeast Asia
Việt NamTiếng ViệtVietnamese日本日本語Japanese中国中文Chinese
South America
BrasilPortuguêsPortuguese
NewsfeedBreaking
18:50 GMTBeijing Has No Plans to Invite to Olympics US Politicians Calling for Boycott, Report Says
18:35 GMTMI5 v MI6: Tug-of-War Over a Triple Defector
18:30 GMTOutrage in Italy After Female Correspondent Sexually Harassed During Live Broadcast
18:26 GMTFrom Geek Fashion Model to Big-Tech Gandalf — Jack Dorsey's Rise and Fall
18:13 GMTWho is Parag Agrawal, New Twitter CEO?
18:08 GMTFrench Prosecution Demands Imprisonment, Fine, Political Ban of Former PM Fillon - Reports
18:04 GMTBiden Ready to Release More Oil From Strategic Reserve to Keep Prices Down- Energy Adviser
17:47 GMT'Plausible Deniability': Joe Biden Was Aware of Hunter's Chinese Deals, But Knew No Details – Report
17:03 GMTPresident Joe Biden Delivers Update on US Response to Omicron Coronavirus Variant
17:02 GMTTwitter CTO Parag Agrawal to Replace Jack Dorsey as CEO
16:49 GMTGerman Inflation Rate Soars to 29-Year High of 5.2% – Statistics
15:44 GMTNew Omicron COVID Variant May Cause Stagflation, Economist Warns
15:37 GMTSwedish Parliament Votes Andersson for Prime Minister Again After Surprise Resignation
15:35 GMTRihanna Stuns Netizens With Her Company’s Pyjamas With 'Derriere Cleavage'
15:23 GMT12 Indian Politicians Suspended From Parliamentary Session, Opposition Brands Move 'Undemocratic'
15:22 GMT'Trying to Keep Fart in Your Pants': Piers Corbyn's Anti-Mask Video Baffles Netizens
15:18 GMTRDIF: New Sputnik V Version Adapted to Omicron Variant in Development
14:44 GMTCOVID-19 Cases Among Fully Vaccinated on the Rise in India As Omicron Variant Fears Escalate
14:23 GMTJack Dorsey Steps Down as Twitter CEO
14:19 GMTDOJ Prosecutors Say Bannon Trying 'to Have His Trial Through the Press' Rather Than in Court