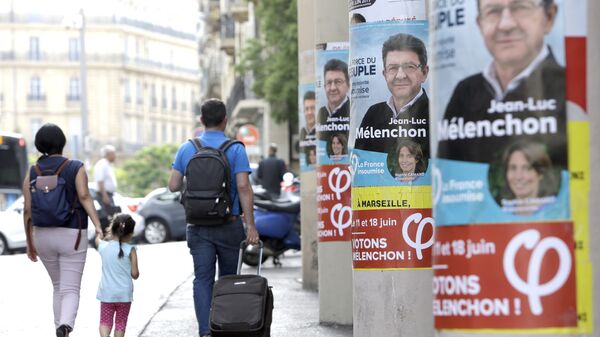 Just weeks after the presidential election, French voters of the metropolitan area are preparing to cast ballots again as the first round of elections to the National Assembly, the country's lower house of parliament is approaching.

The lawmakers are elected by a single-mandate majoritarian system. The victory in the first round is secured by the candidate, who received the absolute majority of votes. For those constituencies where the winner will not be determined immediately, a second round of voting will be held a week later. Two or more candidates with the highest number of votes, or all contenders for whom not less than 12.5 percent ​​of citizens voted, are included in the ballot. A simple majority of votes will be enough to win in the second round.

Security at almost 67,000 polling stations will be provided by 50,000 police and gendarmes, as well as soldiers of the Sentinelle operation to patrol public venues and transport hubs across the country.

French Republique en Marche Party May Win More Than 289 Seats
For the French living abroad, the vote took place a week earlier, on June 3 and June 4. A total of 717 polling stations were opened for voters with the turnout at reaching 19.1 percent. The second round will be held simultaneously with Paris, on June 18.

Candidates from the La Republique En Marche party (LREM), founded by French President Emmanuel Macron won in 10 out of 11 constituencies outside of France in the first round. The only district where the candidate of Macron's movement could not win was the one which includes the countries of the Maghreb.

Prior to the beginning of voting in Metropolitan France, it started in the overseas territories and the overseas departments of France. Polling stations for the voters of Guadeloupe, French Guiana, Martinique, St. Barthelemy, St. Martin, St. Pierre and Miquelon have opened on Saturday.

The number of candidates from each constituency varies from three to 27, but on average, there are 14 candidates per district.

According to Le Monde newspaper, the most popular male name among the candidates for the National Assembly was Michel — 130 candidates. Next come Philip (103) and Christophe (88). The most popular female name was Isabel (78), followed by Kateryn (69) and Anne (60).

The newspaper also noted that the candidates were younger this year. If in 2012 the average age of the candidates was 50 years, while in 2007 it was 51 years, then in 2017 this indicator was kept at the level of 48.2 years.

According to the Ipsos/Sopra Steria survey published on Friday, the La Republique En Marche party has the support of 31 percent of voters. The party may gain from 397 to 427 seats out of 577 in the parliament. The main opposition in the face of The Republicans party and its allies can get 22 percent of the projected votes, which corresponds to 95-115 seats. The National Front party is supported by 17 percent of respondents, which will allow it to receive from five to 15 seats in the parliament.

The Elabe poll also puts the La Republique En Marche in the lead with 29 percent followed by The Republicans with 23 percent while the National Front is projected to finish third scoring 17 percent.