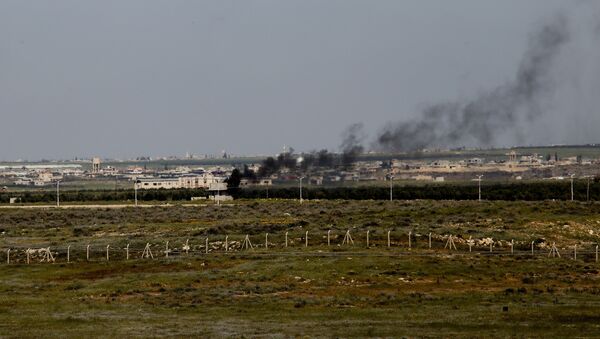 The Russian General Staff announced that the Syrian government troops have established control over a part of the country's border with Jordan.

The Syrian army now controls 105 kilometers of the Syria-Jordan border and has already installed nine checkpoints, the commander of the Russian grouping in Syria, Col. Gen. Sergei Surovikin said.

"As part of the advance of the Syrian army and militia on Daesh's positions, the control over 105 kilometers of the Syrian-Jordanian border has been restored."

Jordan Planning to Deploy Troops in Syria in Coordination With US - Assad
"The efforts of the government forces on establishing full control over the Syrian-Jordanian border and the border with Iraq continue," he said.

He added that a reconciliation process between tribes controlling the area is underway.

The Syrian army and militia defeated large groups of Daesh militants in the past month, and the terrorists suffered substantial losses, Surovikin added.

"Over the last month, the government troops and militia units have been successful in the north-east of the Aleppo province, near Palmyra, Eastern Qalamoun and in the south of Syria, they actively operate, moving along the Syrian-Jordanian border and the border with Iraq. As a result, large groups of Daesh were defeated, while the enemy suffered significant losses in manpower and equipment," Surovikin said.

Surovikin pointed out that just in a month they managed to liberate 109 settlements and 3,922 square kilometers (1,514 square miles) of the territory.

Earlier, Syrian President Bashar Assad told Sputnik that the Syrian government has intel suggesting that Jordan was planning to deploy tropps in Syria in coordination with the US.