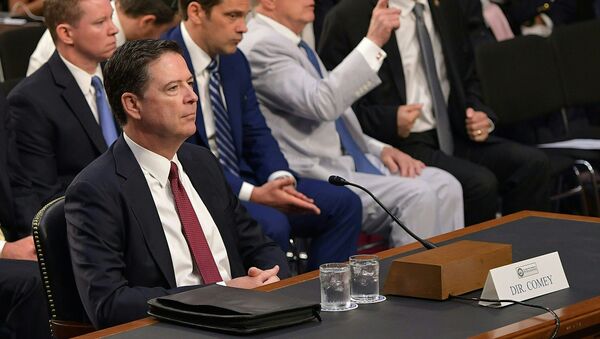 © AFP 2022 / Mandel NGAN
Subscribe
Former FBI Director James Comey is testifying on the Trump-Russia probe at the Senate Intelligence Committee. It is Comey's first public appearance since Trump fired him on May 9.

"The Americans need to hear your part of the story," Chairman Richard Burr said when opening Comey's testimony.

He added that the Americans also need to hear US President Donald Trump's description of events with Comey.

Kremlin More Interested in SCO Summit Than in Comey’s Congress Hearing
"We must find out the full story, why the Russians were so successful," Warner claimed.

Warner alleged that the "Russian dictator" ordered the hacking of the DNC, however, yet again no proof has been provided.

He mentioned Trump repeatedly asking Comey to stop the Russia probe, saying it had been inappropriate.

"Regardless of the outcome of our investigation into the Russia links, director Comey's firing and his testimony raises separate and troubling questions that we must get to the bottom of," Warner stated.

Comey's firing "didn't pass the smell test," Warner said, adding that Trump himself admitted that it had been li nked to the probe, not the pretext that had initially been voiced.

"It is not a witch hunt and fake news, it's an effort to ensure the safety of our country," Warner said, probably responding to Trump's Twitter statements against the investigation.

In the beginning of his testimony, Comey said that the "shifting explanations" of his firing "confused me and increasingly concerned me."

Comey said he believes that something in the way he conducted the Russia probe led to his firing by Trump. "Yes, because I've seen the president say so."

Russian FM Lavrov Refutes Claims That He Discussed Comey's Dismissal With Trump
He said that he was not aware of any particular administration member recommending his dismissal to Trump.

Comey said that Trump has repeatedly told him that he was "doing a great job."

"That didn't make any sense to me," Comey said when commenting on the pretext of his dismissal allegedly over his actions during the US election campaign.

"The FBI will be fine without me," Comey noted, emphasizing that the intel agency is honest, strong and independent.

He said that Trump or any other member of his team didn't ask him to stop the Russia probe. When asked if at any time Trump asked him to stop the FBI investigation into allegations of Russia’s involvement in the 2016 election, Comey responded, "Not to my understanding, no."

The ex-FBI chief explained why he documented this private talks with Trump. Comey said that he was concerned Trump might lie about their private meeting on January 6. He said that he knew there might come a day when he would need a record to defend himself and the FBI.

"I was honestly concerned that he might lie about the nature of our meeting and so I thought it really important to document," Comey told the Senate Intelligence Committee.

He added that such a record was not needed when he met Barack Obama or George W. Bush.

Comey said he asked his "close friend" to share the content of his memo of meetings with Trump with the press. He said that he believed that sharing memo might lead to the appointment of a special counsel.

Comey said he had never initiated any communication with Trump.

He added that Trump told him he was eager to work with him, talked about "me staying." He said that his "common sense" told him that Trimp wanted something in exchange for Comey keeping the job.

Comey said Trump was not under investigation when he was the FBI director.

When asked if Trump didn't order him stop investigating former National Security Advisor Michael Flynn, Comey said that "in his words no." However, he believed it was an order. "That's the way I took it," Comey said, adding that he "can be wrong."

"I don’t remember conversations with president about the Russia election interference," Comey said when asked whether Trump showed any concern or curiosity about the matter. "There was an initial briefing of our findings… but after that I don't remember anything."

'It's His Job': Putin Aware of Content of Ambassador Kislyak's Talks With Flynn
He said he was stunned by the Oval Office conversation with Trump about Flynn. He said that he didn't speak to Trump after April 11.

When asked whether Trump's requests regarding the Flynn-Russia probe rise to the level of obstruction of justice, Comey stated, "I don’t know. That’s Bob Mueller’s job to sort that out. "

Comey added that his FBI colleagues informed about the situation, were as shocked and troubled he was by the US president's request to drop the Flynn probe. He added that he told nobody in the White House it was inappropriate because he was "stunned."

Comey told US Senate Intelligence Committee on Thursday that President Donald Trump believed the investigation into Russia's alleged meddling in the US election distracted him from focusing on the agenda.

"I think what he meant by the "cloud" was that the entire investigation is taking up oxygen and making it hard for him to focus on things he needs to focus on," Comey said of Trump.

Comey said that the Justice Department leadership asked him not to call the Russia probe an "investigation" and asked him to name it a "matter," thus "confusing" the former FBI director.

US Attorney General Sessions Offered Resignation in May, Trump Declined
Comey said that the FBI thought US Attorney General Jeff Sessions would recuse himself from the Russia probe for "variety of reasons," adding that he wouldn't say more in public.

Comey said during the testimony that he had "no doubt" that Russian hackers with the knowledge of the government interfered in the US election. He, however, said that he is confident that no votes in the 2016 US presidential election had changed as a result of alleged Russian actions.

When asked if he was confident no votes cast in the 2016 election were altered, Comey responded, "I'm confident. When I left as [FBI] director, I had seen no indication of that whatsoever."

Comey claimed that the FBI became aware of alleged Russian cyber intrusion in late summer of 2015. He added that the Barack Obama had been notified of the situation.

Putin Mocks Claims of Russian 'Fingerprints' in US Election Inteference Case
The former FBI chief claimed that Russia targeted hundreds of US entities.

"It was a massive effort to target government agencies and nonprofits," Comey told the US Senate Intelligence Commitee. "It was hundreds, it could be more than a thousand, but at least hundreds of entities were targeted."

"Yes," Comey stated when asked by US Senator Tom Cotton if the story was almost entirely wrong. Cotton was referring to a February 14 New York Times story that claimed US law enforcement and intelligence agencies intercepted communications between Trump associates with senior Russian intelligence officials, prompting US agencies to investigate if the Trump campaign was colluding with Russia.

Russia has repeatedly denied allegations it had meddled in the US political process and has called such allegations absurd. Kremlin spokesman Dmitry Peskov has said Moscow did not have official contacts with Trump's team during the presidential campaign.