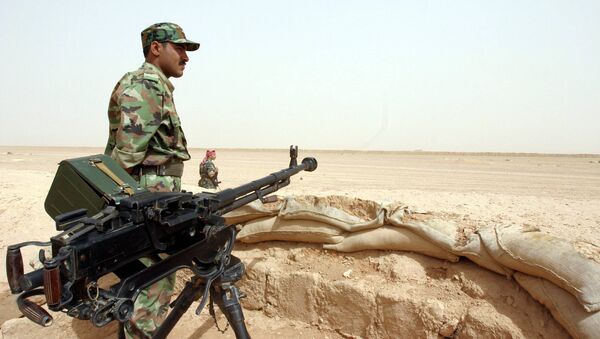 The Syrian government army is launching simultaneous attacks in different directions, which are so successful that the attempts to slow it down won't be long in coming, says Russian political analyst Evgeny Krutikov. He suggested that the West has found a new pretext for the extension of the conflict – the control over the borders with Syria.

US Strikes on Syrian Army 'Intentional, Aimed at Extending the Conflict'
From the beginning of summer, the Syrian government forces have been steadily maintaining their initiative on all ongoing military fronts, Evgeny Krutikov writes in his article for Russia's online newspaper Vzglyad.

Russian aviation is being used to deliver selective strikes on the columns of jihadists, who are moving to the front lines from the rear, mostly from Raqqa.

The Syrian army is now able to move freely in the desert, which was earlier accessible only to the militants. Before, the Syrian Forces were able to move only along the highways, and it was very easy to cut off its supply routes.

These developments pose a threat to external political players, the political analyst says, who would try if not to stop the successful operations of the government forces, then at least will attempt to slow them down, "until further clarification."

Krutikov then suggests how the US-led coalition might be able to do it. For example, he says, the US-coalition in Iraq voices its dissatisfaction that part of the Syrian-Iraqi border is now under control not of Damascus, but of its allied Shia units.

Jordan Planning to Deploy Troops in Syria in Coordination With US - Assad
Baghdad sees it as Iran’s scheming, which is allegedly going to set up a military corridor from its territory through Iraq to Syria, thus seeking more favorable conditions at a new round of peace talks either in Astana, or Geneva.

"Those are the usual geopolitical fears of the Middle East. Similar claims are being laid by Ankara to the Kurdish units. Such bogus claims could have a serious influence on the western judgment of what is going on the ground in Syria and provoke its interference," the political analyst says.

Hence it could use it as a formal pretext to return control over the borders with Syria, this time blaming not Assad, but Iran.