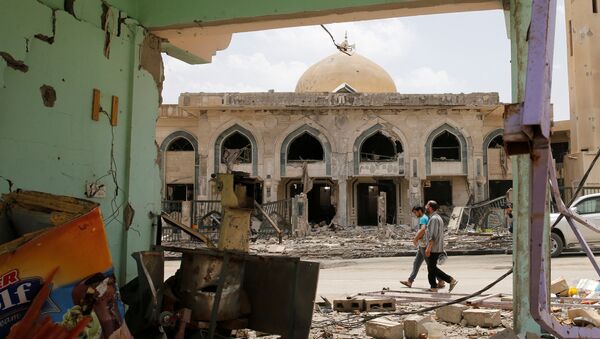 © REUTERS / Muhammad Hamed
Subscribe
A freelance photographer claims to have taken the photos and the video of what appears to be the torture of civilians who escaped from the Daesh by the Iraqi special forces unit, the RT broadcaster reported on Wednesday.

MOSCOW (Sputnik) — According to the broadcaster, citing photographer Ali Arkady, the photos taken in December last year depict Ahmed Abdullah Hassan and Leish Abdullah, two brothers who escaped the Daesh-controlled neighborhood of the Iraqi city of Mosul and were questioned, allegedly, at the Emergency Response Division (ERD) intelligence headquarters.

The photographer reportedly said that the brothers were later killed.

"At no time were US forces aware of or informed of these allegations until you brought them to our attention," the Combined Joint Task Force Operation Inherent Resolve said in a statement to RT.

Pentagon also reportedly told the broadcaster that the United States was not training or providing the unit with the equipment at the moment, but "Leahy vetting does not prevent the US from working with the ERD."

How Mosul, Aleppo Become MSM's "Double Standards for Dummies" Manual
The unit has reportedly been blacklisted from receiving any official aid from Washington under the Leahy Act, which since 2015, following the airing of the ABC investigation on the human rights abuses committed by the unit members. The Leahy Law, precludes the US Department of State and Department of Defense from providing military assistance to foreign forces that violate human rights.

According to the ABC broadcaster that also published the photos, ERD Capt. Omar Nazar told the outlet the tactics employed by the unit were justified because their prisoners had links to terrorists.

Since the fall of last year, the Iraqi Armed Forces backed by the US-led International Coalition have been leading an operation to liberate Mosul, which Daesh made its stronghold in Iraq. Humanitarian organizations have repeatedly drawn the attention of the international community to the plight of civilians in the city and its vicinity.