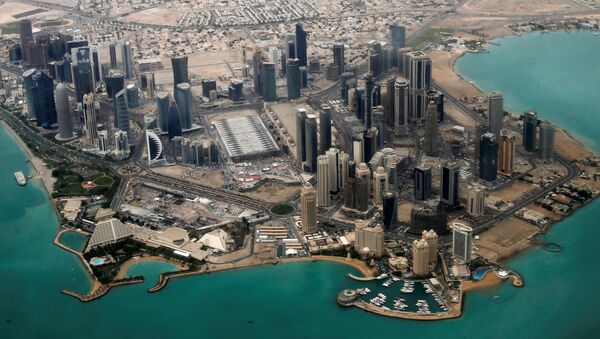 On June 5, Bahrain, Saudi Arabia, Egypt, the United Arab Emirates, Yemen, Libya and the Maldives severed diplomatic relations with Qatar over its support of terrorism and its alleged political meddling. Russian political analysts explained to Sputnik how it’s related to Iran and Donald Trump's recent visit to the region.

How Arab States Cut Off Diplomatic Ties With Qatar Over Support of Terrorism
In his interview with Sputnik, Russian political analyst and head of the Middle East-Caucasus think-tank Stanislav Tarasov noted that the crisis in the Arab world between Qatar and its neighbors occurred one week after the Arab Islamic American Summit in Riyadh, which took place May 20-21, when a Qatari news agency posted a speech on behalf of the country's emir in support of building relations with Iran.

"This is the first crisis of the coalition which Riyadh attempted to set up during Donald Trump's visit to Saudi Arabia, where he met the participants of the Arab Islamic American Summit. It was at the Summit that the attempt to set up the so-called 'Sunni NATO' or NATO of the Persian Gulf was first announced," he reminded Sputnik.

This is the alliance’s first crisis, he said, and the causes of it are not obvious as the aim of the coalition was the fight against Iran. And while Iran’s response was certainly tough, not many expected the crisis to break out so soon, the political analyst said.

He further suggested that the reasons for cutting diplomatic ties with Qatar run much deeper than officially announced.

"It is relatively stable in Syria now, much to the benefit of the government forces and official Damascus which is being supported by Iran. The fighting is going on in Yemen where the rebels, who are fighting against the Saudi-led Arab coalition, are being supported by Iran. Meanwhile, the Qatari capital Doha has been suspected of sympathizing with Tehran," Tarasov explained to Sputnik.

The true causes of the scandal are much more complicated and mired in intrigue, he said. Hence there could be very swift and unpredicted politico-diplomatic combinations. Qatar, for example might take part in the settlement of the Syrian crisis, however nobody knows what position it is going to take.

Qatar 'Far Less Dangerous Than Saudi Arabia' Despite Riyadh-Led Terror Sanctions
It might now support the position of Iran, the political analyst suggested. Iran however previously reiterated that the Syrian settlement is the sole business of the country, and the Western countries and Russia should be only the observers and guarantors of the process – not the participants.

Stanislav Tarasov, however, ruled out any possibility of a large-scale regional conflict between Iran and the regional monarchies. Iran is a tough nut to crack and its opponents clearly understand this, he said.

Dmitry Solonnikov, director of the Institute for Modern State Development, suggested that the major cause of the conflict is the recent trip of Donald Trump to Saudi Arabia and the cutting of support of Daesh and other terrorist groups fighting in the region.

He suggested that now the countries will try to find out who has unleashed and backed the global international terrorism. In this sense, Qatar is being made the unlucky scapegoat.

"Trump's visit has put a dividing line between the countries. Some countries are in a coalition with the US and they will be allowed to do anything while other countries will be nominated as outlaws. Among the latter is Iran and now Qatar has been pushed into the same category," he explained to Sputnik.

The Maldives' Gov't Explains Why It Severs Diplomatic Relations With Qatar
Without the agreement with the US, which to the last remained Qatar's partner, Saudi Arabia and other countries would not have gone to the extreme of destroying their ties with Qatar, he suggested. Such a step has been previously agreed upon, and now Qatar is being squeezed out of the Arab world, the expert said.

Qatar will be further pressured economically and geo-culturally, due to the prominence of the Al Jazeera news channel that presents the main media image of the Arab world, he said.

It can be pressured economically by the European countries and the US, he suggested. It might be announced as the sponsor of the world terrorism and therefore sanctioned, Solonnikov concluded.