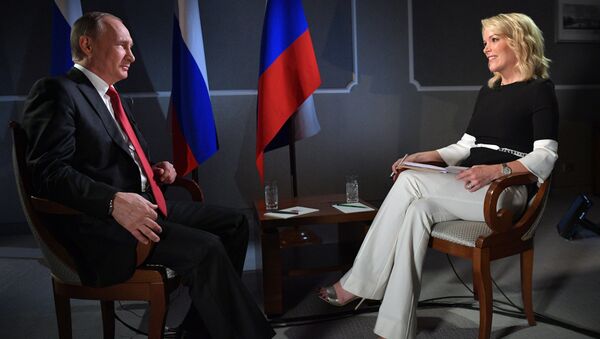 © Sputnik / Alexei Druzhinin
/
Go to the photo bank
Subscribe
Megyn Kelly, the NBC news anchor who became internationally recognized for her verbal fisticuffs with Donald Trump, got the chance to try and grill Russian President Vladimir Putin in a one-on-one interview in St. Petersburg over the weekend. On Sunday, Kelly told NBC's Sunday Today what it was like to sit down with the president.

Kelly, who was a moderator at the St. Petersburg Economic Forum, got in a heated exchange with Putin at the event. The Russian president made several jokes and lightly trolled her on issues including NATO, climate change, and especially the allegation that Russia had somehow hacked into the 2016 US presidential elections.

Later, Kelly was invited for a one-on-one interview with the Russian president, quizzing him for her new Sunday program.

Putin: Obama Started Doubting Alleged Russian Vote Meddling After Conversation
Ahead of the forum and the one-on-one interview, Putin was shown amicably joking with the journalist, saying he fully expected her to try and "grill" him with some tough questions. Kelly responded saying she was "looking forward to that." Putin also complemented Kelly on her looks, joking he wouldn't be able to talk to her at either event because he would be too busy admiring her.

Speaking to Sunday Today's Willie Geist about the interview, Kelly said that she definitely did sense a difference in Putin's behavior on and off camera.

"Off camera and privately, he, towards me, was warm, he was extremely polite. He inquired after my family, he revealed details about his own family, and things that were off the record, but was very personable one-on-one," Kelly said. 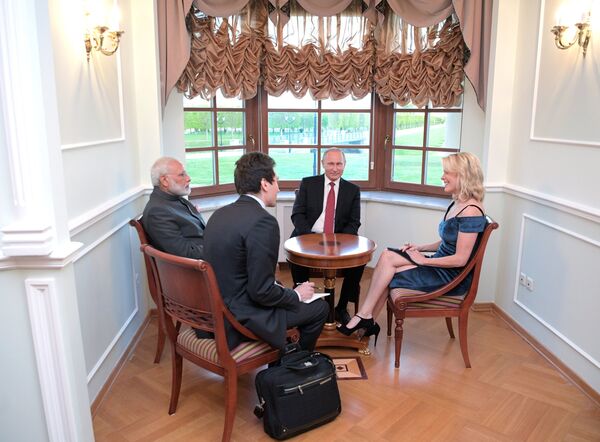 "On camera, he was the Russian president that we've all come to know," she added. "He was combative, he was defiant, he was feisty, he was fiery, he was on offense on most of the issues, and he was the Vladimir Putin that Russians love to see. He actually likes to be challenged, and I did challenge him, and it led to a couple of very dynamic, almost explosive exchanges."

In the one-on-one interview, Kelly spent almost the entire time on allegations that Russia had hacked the elections.

Putin shot them down one by one, citing the astonishing lack of evidence and adding that Russia was being used as a convenient boogie-man for political forces in the US to blame for all their problems.

Putin Reveals Details of His Meeting With Flynn in 2015
In the final minute of the interview, Kelly turned to other boilerplate claims against Russia, asking the president to respond to the regular allegations about corruption, repression and a lack of democracy.

Putin responded: "I want to say that Russia is developing along a democratic path. That is certain, and no one should have any doubt about that. Why do you feel you have the right to ask us these kinds of questions, and do it all the time, to moralize and to give us lessons on how to live? We are ready to listen to comments, when it's done constructively, with the goal of establishing a relationship, creating a common environment. But we will absolutely not accept when these sorts of things are used as an instrument of political conflict. I want everyone to know that. That's our message."