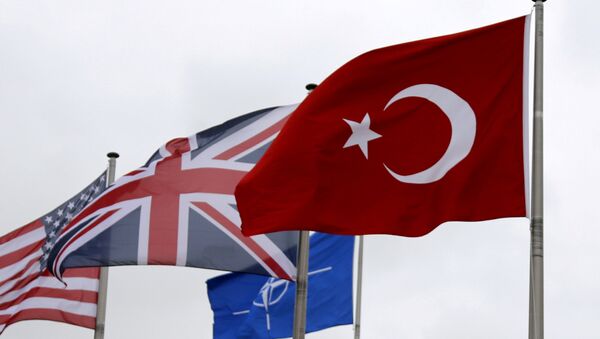 © REUTERS / Francois Lenoir/File Photo
Subscribe
A number of European countries want to ensure that the 2018 NATO summit will not be held in Istanbul, Turkey.

The diplomats of almost 20 NATO member states, including Germany, France, the Netherlands, Denmark and Canada want to send a clear signal that they do not support the internal policy of the Turkish government, the German newspaper Die Welt reported.

"We do not want to enhance Turkey's international credentials and we want to avoid the impression that NATO supports the Turkish government's internal policy," a high-ranking NATO official told Die Welt.

Turkish President Recep Tayyip Erdogan initially offered to host the summit in Istanbul at the alliance meeting in Warsaw in July 2016. At the time, no decision was made. Experts said that the decision could be made automatically.

Germany Wants to Prevent 2018 NATO Summit From Being Held in Turkey
In recent months, relations between Turkey and the European Union have significantly deteriorated. Brussels has expressed concerned over the outcome of the recent Turkish referendum, which granted the Turkish president more powers, and over Ankara's suggestion on reintroducing the death penalty. The EU has also accused Turkey of persecuting opposition political activists and journalists.

Earlier this month, European Commission President Jean-Claude Juncker said that if Turkey reintroduced capital punishment, it would mean the end of the country’s talks on the accession to the bloc.

However, Brussels-Ankara ties first soured in 2016 at the height of the European refugee crisis. According to an agreement between Turkey and the EU, Ankara helped stem an unprecedented migrant flow to Europe. In exchange, Brussels promised to liberalize a visa regime for Turkish citizens.

Turkey to Restore Relations With EU If Visa Waiver Granted - Erdogan's Spokesman
In May 2016, the European Commission released a package of proposals, including recommending a visa-free regime between the EU and Turkey.
However, two week after, Martin Schulz, then president of the European Parliament, said that Brussels would not consider visa liberalization until Ankara met all of the 72 criteria imposed by the EU, including reining in Turkey’s broad antiterrorism law. Brussels predicted that Ankara would not go that far, and as a result the road to the EU for Turkey was closed.

A new spike in tensions came earlier this May when Ankara refused to allow lawmakers from Berlin to visit the Incirlik air base, where German troops are stationed.

"Germany negatively looks at Turkey, and now they say: 'We want to come to Incirlik.' Germany must understand that Turkey, which it can force to do what it wants, and to get what it wants from it, exists no longer. This remains in the past. In such conditions it is impossible to allow German parliamentarians to visit Incirlik," Turkish Foreign Minister Mevlut Cavusoglu said.

In fact, Turkey denied access to its air base for its NATO ally. It cannot be ruled out that the move also came as a reaction to Berlin granting asylum to alleged supporters of a military coup attempt in Turkey last summer.

Turkey Confirms Vetoing Austria's Participation in Several NATO Programs
Following the incident, tensions have been on the rise. As a full-fledged NATO member, Turkey holds a veto right in the organization.

Ankara blocked the participation of Austria, which is a non-NATO member, in several programs of the military alliance.

Explaining the move, Erdogan said that Ankara vetoed Austria’s participation in NATO programs in connection with the blocking by Vienna of Turkey’s accession to the EU.

A number of Austrian politicians, including Foreign Minister Sebastian Kurz and President Alexander Van der Bellen, have made a number of statements criticizing such issues as the crackdown on alleged supporters of the thwarted 2016 coup and the referendum on constitutional amendments in Turkey that broadens presidential powers, saying that they move Ankara away from EU values and accession to the bloc.

Austrian Defense Minister Hans Peter Doskozil criticized the blocking, saying: "It is irresponsible behavior against Austria and strengthens my position that Turkey is very far from being part of the EU."

Turkey Loses Its Trump Card by Granting NATO Access to Incirlik
NATO found a way out of the situation by allowing a bilateral partnership between NATO members and non-alliance nations. However, this framework complicates cooperation. Moreover, Turkey may repeat the scenario by blocking NATO cooperation with any other country.

In the current situation, Turkey could reach out to the United States, the leading power in the alliance. But ties between Ankara and Washington are also complicated.

First, the US supports Kurdish units in Syria, belonging to the People's Protection Units (YPG), a political and military adversary of Ankara.

Second, the US has refused to extradite Turkish cleric Fethullah Gulen now living in Pennsylvania. Ankara claims that Gulen was the initiator of the attempted military coup in 2016.

In addition to political and military differences, there is a negative personal component in the current US-Turkey ties, concerning the personality of President Donald Trump. During the presidential campaign, Trump repeatedly called for a ban on Muslims entering the country and promoted the idea of a Muslim registry. In response, Erdogan called for Trump’s name to be removed from the Trump Towers in Istanbul, saying he had "no tolerance for Muslims."