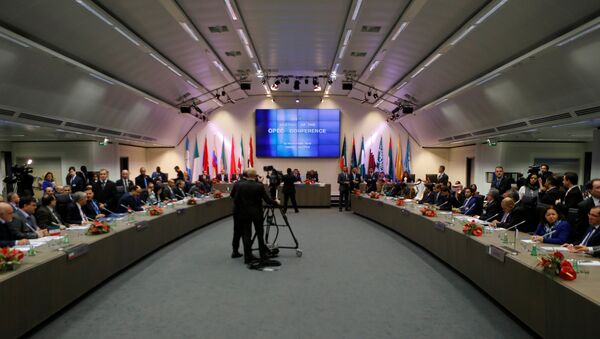 © REUTERS / Heinz-Peter Bader
Subscribe
The Organization of the Petroleum Exporting Countries (OPEC) will hold its 172nd ordinary meeting in Vienna on Thursday, followed by a ministerial meeting with non-cartel countries to agree an extension to oil output cuts.

OPEC, Non-OPEC Monitoring Committee Says to Meet in Russia in July
VIENNA (Sputnik) — The JMMC, the joint committee of ministers from the cartel and non-OPEC producers, recommended on Wednesday prolonging the deal by nine months, while keeping the same level of production cuts for the OPEC and eleven major oil producers.

Ministers will also consider extending production cuts for other periods of time, including six months and until the end of 2018. The initial deal expires in June.

It remains unclear if Iran, Libya and Nigeria will still receive concessions under the pact should it be extended. They were exempted from limiting quotas, agreed in November, as Iran is increasing production to pre-sanction levels, Nigeria is struggling to recover from crippling militant attacks on oil facilities and Libya is mired in a conflict.

OPEC, Non-OPEC States Consider One Scheme for Oil Cut Deal Extension - Minister
While OPEC is unanimously supporting the idea of extending production cuts to rebalance the oil market, according to Iranian Oil Minister Bijan Namdar Zanganeh, not all non-cartel countries have made their stance clear.

Thursday's ministerial meeting may also be joined by several new non-cartel producers, with Egypt and Turkmenistan speculated to be interested in attending. Russian Energy Minister Alexander Novak said earlier three to five oil exporters were in talks to cut their oil production.

The OPEC agreed last fall to reduce oil output by 1.2 million barrels per day for the first six months of 2017, with a daily cartel-wide cap standing at 32.5 million barrels. In turn, eleven non-OPEC producers, including Russia, agreed to jointly slash their output by 558,000 barrels a day.