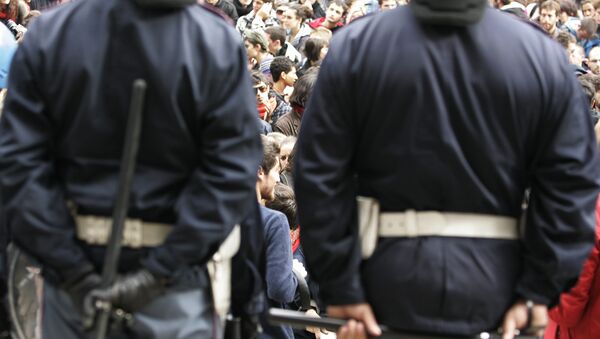 © AP Photo / Gregorio Borgia
Subscribe
Rome is planning to tighten security measures in the wake of the deadly blast in the UK city of Manchester that left at least 22 people dead and a hundred more injured.

Manchester Terrorist Attack 'Barbaric And Cowardly' - UN Security Council
ROME (Sputnik) — The Italian authorities decided to strengthen the security measures in the country after a deadly terrorist attack in the UK city of Manchester, adding that the level of threat in the country will remain on the same maximum level during the upcoming visit of US President Donald Trump and the G7 summit, Italy’s Interior Ministry said Tuesday.

Earlier in the day, Italian Interior Minister Marco Minniti called an emergency meeting of the national anti-terror committee over the Monday night blast at a pop concert in Manchester, which left at least 22 people dead and almost 120 injured. Daesh terror group, which is outlawed in Russia, reportedly claimed responsibility for the incident.

"Minister Minniti asked to preserve the high level of vigilance, increasing security measures for protection of the most endangered facilities as well as the places of particularly massive congestion … In the light of upcoming event, such as the G7 meeting, the awareness remains at the most highest level … The level of threat for Italy will not change," the statement read.

According to local media reports, the Italian law enforcement agencies have been in permanent contact with their UK colleagues to receive information about the attack in Manchester. Local police departments have been warned about the threat of terror attacks at concerts and other public events.