The Macedonian Crisis Isn't Over, and a Bigger Balkan One is Just Beginning 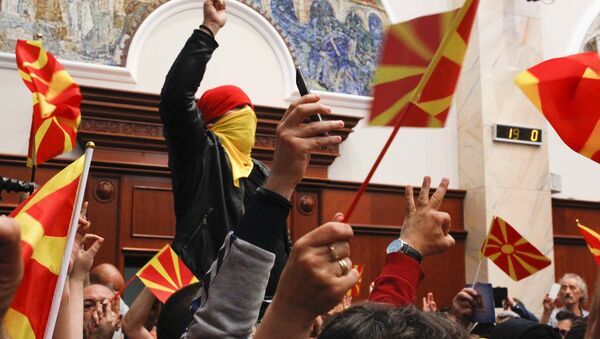 Andrew Korybko
All materials
The US didn't resolve Macedonia's crisis, it made it much worse, and the fate of the Balkans is now in jeopardy because of the latest American-brokered "deal".

Lavrov Hopes 'West Realizes Danger' of Destabilizing Situation in Macedonia
On paper at least, this was supposed to end the two-and-a-half-year-long political crisis in the country, and the announcement was certainly celebrated as such by unipolar media.

In reality, however, this decision existentially endangers the Republic of Macedonia because the only thing preventing its forthcoming "federalization" and eventual partition between its Albanian and Bulgarian neighbors is the signed pledge of convicted (but pardoned) Zaev that he won't pursue the notorious "Tirana Platform".

This set of socio-political demands was literally drafted in the neighboring capital of Tirana after December's parliamentary elections in Macedonia, and it essentially lays out the blueprint for the "federalization" (internal partition) of the country into Albanian and Macedonian halves. The "Tirana Platform" became the policy of all Albanian opposition parties in Macedonia, and it was accepted by Zaev in order to gain their support and thereby outmaneuver his rival Nikola Gruevski's ruling VMRO-DPMNE in forming a government.

Balkan Knot: Macedonia's Political Crisis Threatens to Redraw European Borders
After months of political stalemate and without receiving the mandate to do so, SDSM unilaterally behaved as though it was indeed the ruling party of the country and attempted to swear in former Albanian ethno-supremacist militant Talat Xhaferi as the Speaker of Parliament, but was unable to do so at the time because throngs of Macedonian patriots stormed into the building to stop this illegal act.

Regrettably, their heroic actions were ultimately in vain, since the government ended up submitting to Yee's pressure (popularly speculated to be a mix of personal and Hybrid War threats) by surprisingly validating the illegal ceremony and subsequently carrying out a witch hunt for those who were involved in disrupting it.

There's no diplomatic way to say it other than being honestly blunt — the government sold out its citizens, and the future of Macedonia is now at stake because of it. While VMRO is still perceived by many as being the "lesser evil", it's still now nonetheless seen as an "evil" in and of itself because of its cowardly capitulation in the face of American pressure.

Political Parallels: Will Macedonia Repeat Ukraine's Painful Mistakes?
Although no truly patriotic party presently exists in Macedonia anymore after what happened, that doesn't mean that the country is lacking in patriots. The hundreds of thousands of civil society activists who participated in regular demonstrations over the past month in favor of retaining their beloved United Macedonia, as well as popular journalists such as Milenko Nedelkovski and Mirka Velinovska, could conceivably form the core of a new pro-Macedonian movement-party sometime in the future.

Time is of the essence, however, since it's widely believed that Zaev — as he has a history of doing — will "change his mind" and abrogate the signed agreement to discard the "Tirana Platform" from his agenda, even if he doesn't declare his intentions openly. After all, it will be impossible for him to govern without the support of the Albanian opposition parties which gave him the ability to form a coalition in the first place, so he will probably be compelled to do good on his side of the earlier "deal" in order to retain continued political backing.

Any progress in implementing the "Tirana Platform" will set into motion a fast-moving and almost impossibly irreversible series of events which could very easily lead to the inevitable outcome of "federalization" and therefore the de-facto internal partition of the Republic of Macedonia. Proceeding from that point, a multitude of scenarios could then transpire in leading to the actual partition of the country between its empowered western neighbor and opportunistic eastern one in consequently recreating the World War II-era fascist occupation of ancient Macedonia lands by Hitler's Albanian and Bulgarian allies.

'Overture to a Coup': Macedonia's Crisis May Lead to Country's Disintegration
As historically traumatizing as it is for patriotic Macedonians to countenance this nightmare scenario, it's frighteningly plausible due to the dynamics that would be unleashed with their country's "federalization", which in and of itself is a geostrategic power play by the US and its unipolar allies in order to obtain controlling influence over Russia and China's Balkan megaprojects which are expected to transit through the landlocked country. The US could then either prevent the Balkan Stream gas pipeline and Balkan Silk Road high-speed railway from being built in Macedonia, or passively permit them to be constructed but then retain blackmailing influence over their operations.

It's highly unlikely that Russia and China would feel comfortable with their respective megaprojects being under the US' thumb like that, so each of them might start spearheading alternative backup routes if they're convinced that Macedonia's internal partition is inevitable. China could replace or supplement the Balkan Silk Road with a Slovenian-Hungarian rail corridor to Central and Eastern Europe instead, which might even be more convenient for Beijing because it bypasses the Balkan conflict cauldron entirely and pairs nicely with nearby Venice, which functions as China's gateway to Germany and Western Europe. Russia, for its part, might begin negotiations with Bulgaria to recreate the route of South Stream, even though this could give small Sofia disproportionate leverage over mighty Moscow in any prospective talks.

It's not just the multipolar megaprojects which might be reorganized following Macedonia's "federal" partition and subsequently likely dissolution, but also Balkan geopolitics as a whole after the Pandora's Box of territorial redivision is reopened for another, and possibly the last, time.

Is Macedonia Becoming Hotbed in Geopolitical Standoff Between West and Russia?
The erasure of Macedonia from the map would be a major crisis in and of itself which the Balkans, Europe, and Russia & the US more broadly would be forced to confront. This isn't the realm of "conspiracy theory" either, since former British diplomat and "deep state" representative Timothy Less has been loudly advocating the Western-imposed redrawing of Balkan borders ever since the end of last year, and one of his plans is to actually get rid of the Republic of Macedonia.

The rising fascist-era geopolitical zombie of "Greater Albania" which would swallow up a large chunk of Macedonia and consequently "formalize" its expansionist claims to the NATO-occupied Serbian Province of Kosovo and perhaps even other parts of Serbia, Montenegro, and Greece would instantly catalyze Less' other related project of dismantling the failed identity-fragile Federation of Bosnia and Herzegovina among its three constituent parts. The strategic backdrop to all of this is that Turkey and the GCC states are increasing their influence over the Balkan Muslims in Bosnia and Albania while Russia is enjoying a resurgence of soft power among its civilizationally similar Orthodox co-confessionalists, all of which is occurring while the US maintains regional military hegemony through its second-largest European outpost of Camp Bondsteel in occupied Kosovo.

The War on Serbs

It's Time to Trust Russia, Not Trump, on Macedonia
The US' position smack dab in the center of this transnational region-wide conflict cauldron empowers the Pentagon to fan the flames of destabilization in the direction of its grand strategic interests, which can be summed up as the destruction of Serbia. Not only does "Greater Albania" already pose a threat to other Serbian regions beyond the Province of Kosovo (specifically the Presevo Valley and Raska) which would become all the more dangerously pressing if this geopolitical beast devours Macedonia, but the breakup of Bosnia could lead to the third ethnic cleansing of Serbs since the end of the Cold War.

No one should ever forget that Croatia's NATO-backed Operations Flash and Storm brutally expelled over a quarter of a million Serbs in summer 1995 who had been living in what was called the Serbian Kraijina for centuries. Therefore, it's not too hard to imagine that the Croatian "nationalists/chauvinists" (the "politically correct" term in European parlance for what are essentially the socio-cultural and/or geopolitical successors of the Ustashe) in Zagreb would see the breakup of Bosnia as an historic second chance to expand their territory into the neighboring country as part of a bid to reclaim the Nazi-crafted borders of the "Independent State of Croatia", consequently attempting to cleanse the Serbs out of Republika Srpska just as they did from the Serbian Krajina.

Furthermore, the Serbian Autonomous Province of Vojvodina is also a potential target of the American-backed "Greater Croatia" which can be expected to grow out of Less' desired breakup of Bosnia, though the danger here is a hybrid one more so than a conventional one, but it's still every bit as dangerous owing to the Montenegrin precedent.

NATO 'Wants to Use Montenegro to Militarize Balkans'
The US and its NGO army successful cultivated enough of a distinct regional-political identity for the Montenegrin Serbs that it was able to seemingly "validate" strongman Milo Djukanovic's rigged 2006 separatist "referendum", which was the first time in history that Serbian people "willingly" split from their homeland. Something similar is being planned for Vojvodina, too, though it might end up eventually resulting in an internal partition of "Identity Federalism" than the outright formation of a separate state.

The post-modern Hybrid War tendency is to atomize inclusive identities into exclusive sub-components, which in this case would lead to the unified historic-civilizational Serbian space fragmenting even further into regional-centric statelets loosely held together through a "federal" constitution.

This is the final stage of the War on Serbs, which is an inseparable part of the War on Russia, and it fits into the continuum of hybrid conflict which has been ruthlessly waged against this South Slavic nation since the end of the Cold War.

The War on Serbs has already resulted in ethnic cleansing from the Serbian Krajina in modern-day Croatia, second-class citizenship in Bosnia, the identity transformation of half of the population from Serbs to "Montenegrins" in the now-independent coastal state, hellish NATO occupation and "Greater Albanian"-promoted ethnic cleansing in the province of Kosovo, and being bombed into neo-liberal impoverishment in the rest of Serbia, so it's not unforeseeable that the last step is to further fragment the remaining Serbian state per the "Identity Federalism" internal partition scenario described above for Vojvodina following the erasure of Macedonia from the map.

Conclusively and in terms of the bigger picture, it should be evident that the US didn't resolve the crisis in Macedonia, it deliberately exacerbated it, all with the intention of setting into motion Timothy Less' Balkan redivision plans as a means of undermining the region's multipolar megaprojects and bringing the decades-long War on Serbs to its final phase.