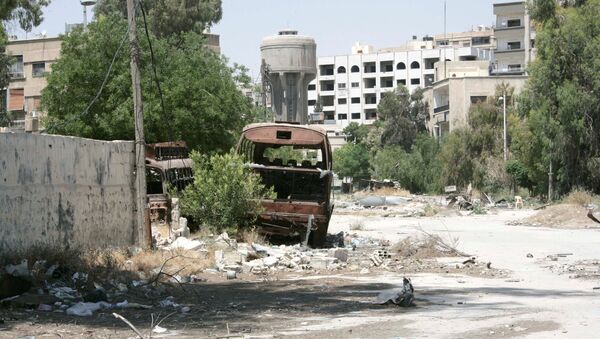 Local sources have released details of the Syrian pro-government forces convoy that was attacked by US-led coalition warplanes in the vicinity of al-Tanf.

Syrian source told Sputnik that the convoy bombed by the US-led coalition aircraft in the vicinity of al-Tanf did indeed belong to the Syrian pro-government forces.

The convoy itself was comprised of 5 T-62 main battle tanks, a ZSU-23-4 Shilka anti-aircraft weapon system and several four-wheel drive vehicles, crewed by a total of 50 troopers.

US Attack on Syrian Convoy 'Government Terrorism' - Syrian Negotiator in Geneva
The coalition aircraft, flying at very low altitude, entered Syrian airspace from the direction of Jordan and after firing several warning shots launched a missile attack against the convoy, damaging two tanks and several vehicles.

The return fire from Shilka’s four 23mm autocannons forced the attacking aircraft to rapidly gain altitude, thus becoming visible to the radars of the S-200 surface-to-air weapon systems of the 16th regiment based in al Damir. Having detected the retaliatory S-200 missile launches, the invading coalition aircraft quickly fled the Syrian airspace.

A total of six men were killed and three were injured during this attack.

The airstrike was apparently launched in response to the Syrian pro-government forces’ offensive against the US-backed elements, according to Reuters citing an American official.