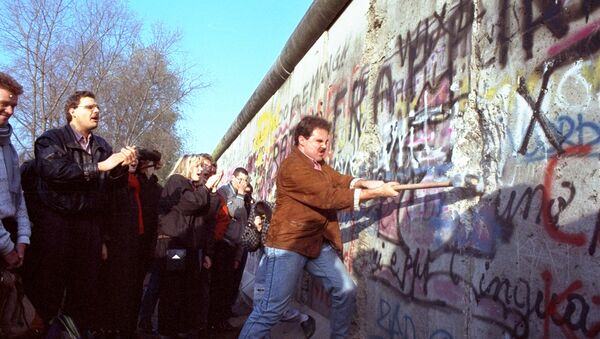 © AP Photo / John Gaps III
Subscribe
Ute Finckh-Krämer, a member of the Social Democratic Party of Germany (SPD) said that at the moment the situation between Ukraine and Russia is the same as between East and West Germany.

Ukrainians Quickly Learn to Bypass Poroshenko's Ban on Russian Websites
BERLIN (Sputnik) — The situation with relations between Russia and Ukraine is similar to that of East and West Germany and Ukraine's recent ban on Russian-language social networks hinders personal communication between the two countries' residents, Ute Finckh-Krämer, a member of the Social Democratic Party of Germany (SPD) said Friday during German parliament's debates on Germany's responsibility before Ukraine.

On Tuesday, Ukrainian President Petro Poroshenko approved the decision of the National Security and Defense Council (NSDC) to expand the list of sanctioned Russian individuals and legal entities. In particular, Ukraine has imposed sanctions on a number of Russian media, popular social networks like VKontakte and Odnoklassniki, Yandex, and Mail.ru services.

"At the moment the situation between Ukraine and Russia is the same as between East and West Germany. I mean a large number of family links among people who live in Ukraine and in Russia… And the issue of accessibility of Russian-language social networks in Ukraine is not simply the issue of the freedom of media. The issue is whether Europe wants personal contacts to be on the same level as at the time of East and West Germany or… for countries to be able to communicate on personal level," Finckh-Krämer said.

Ukrainian President's Decree On Expanding Anti-Russia Sanctions Comes Into Force
The debates were initiated by The Greens party and its representative Marieluise Beck said that Germany bore responsibility for the World War II before Russia as well as Ukraine, but Ukraine is "the only one among the countries that suffered where the war is currently raging."

Christoph Bergner, a member of the Christian Democratic Union of Germany (CDU) stressed the importance of "restoration" in Ukraine and said that Germany should be ready to help stabilize the country, strengthen its institutions.

Andrej Hunko, a member of The Left party, said that the most important lesson of the World War II would be doing everything possible to promote the policy of peace toward Russia and Ukraine.

Kiev launched a special military operation in Ukraine’s southeast in April 2014, after the self-proclaimed Donetsk People’s Republic (DPR) and the Luhansk People’s Republic (LPR) refused to recognize the new government in Kiev. In February 2015, a peace deal was signed between the conflicting sides in Minsk, brokered by the leaders of Russia, France, Germany and Ukraine — the so-called Normandy Format.