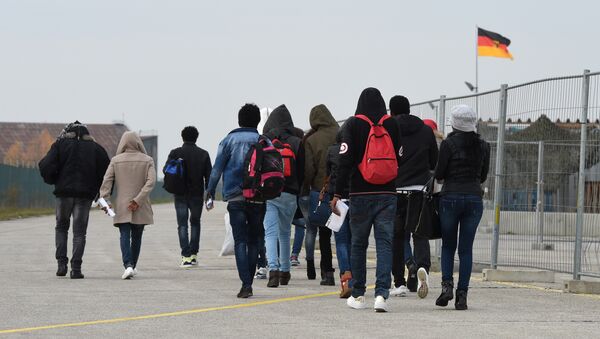 © AFP 2023 / Christof Stache
Subscribe
International
India
Africa
The German parliament passed a law making it easier for the authorities to detain asylum seekers who were not allowed to stay in the country, the parliament’s statement said.

German Parliament Passes Law to Increase Video Surveillance in Public Places
MOSCOW (Sputnik) – The law was adopted on late Thursday despite the fact that the opposition parties, as well as two lawmakers from the Social Democratic Party (SPD), which is a member of the ruling coalition, had voted against the bill.

The German authorities will now have to keep a better watch over migrants who were not allowed to stay in the country. Those who pose a threat to internal security may be forced to wear electronic restraints on their feet.

Those migrants who provided false information about their identity may be forced to stay in the area assigned for a certain migration body.

Under certain circumstances, Germany's Federal Office for Migration and Refugees (BAMF) gets a right to demand information from migrants’ mobile phones and other electronic devices to reveal their identity.

In 2015, Germany declared an open-door refugee policy, becoming one of the key destinations for migrants coming to Europe from the Middle East and North Africa. According to the country's Interior Ministry, the number of refugees that came to Germany in 2016 amounted to some 280,000, compared to 890,000 arrivals in 2015. The majority of asylum seekers arriving in Germany are from Syria or Afghanistan.