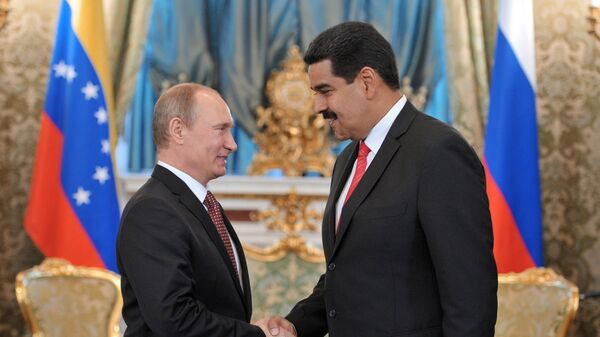 Russian President Vladimir Putin discussed with his Venezuelan counterpart Nicolas Maduro the situation on the oil market, the Kremlin press service said in a statement Thursday.

"On the initiative of the Venezuelan side, Russian President Vladimir Putin had a telephone conversation with Venezuelan President Nicolas Maduro… The sides touched upon the situation on the global oil market, including in the context of the implementation of agreements between OPEC member countries and non-member states on adjusting oil production volumes," the statement said.

Venezuela Backs Russian-Saudi Bid on 9-Month Extension of Oil Output Cuts Deal
Earlier, the Venezuelan Ministry of Petroleum and Mineral Resources said that the country supports the initiative of Russia and Saudi Arabia to extend the agreement on oil production reduction between the Organization of the Petroleum Exporting Countries (OPEC) and other oil producers for nine months.

On Monday, Russian and Saudi energy ministers said in a joint statement that Moscow and Riyadh intended to propose a 9-month extension of the current Vienna agreement on oil output cuts on the existing conditions at the OPEC ministerial meeting in late May.

In November 2016, OPEC member states reached an agreement to cut oil production by 1.2 million barrels per day in the first half of 2017 to boost global oil prices. The deal prescribes the possibility of extension.

The OPEC agreement was supported by 11 non-OPEC states, which joined the deal by promising to jointly reduce oil output by 558,000 barrels per day. Russia pledged to cut production by 300,000 barrels daily. The OPEC has already implemented its commitment while non-cartel countries have implemented over half of the agreed cuts.