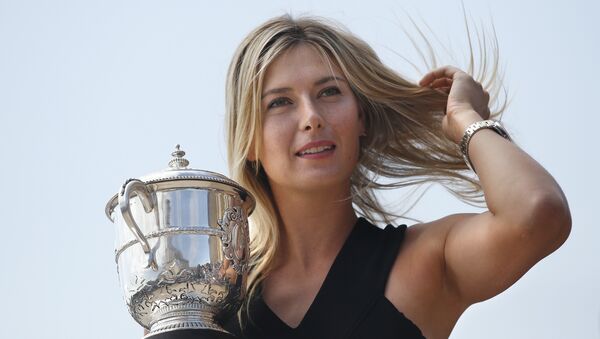 © AFP 2023 / KENZO TRIBOUILLARD
Subscribe
International
India
Africa
Two-time French Open champion Maria Sharapova has been denied the Roland Garros wildcard and will miss out on the competition for a second straight year because of her past doping ban.

The president of the French Tennis Federation, Bernard Giudicelli, phoned Sharapova on Tuesday to tell her she would not be participating in the open, which begins on May 28.

"I decided not to give Maria Sharapova a wildcard," Giudicelli said, announcing the decision via a Facebook Live broadcast.

He said that although he felt pressured, given fans' expectations, the need to "protect the game" made him decide not to do any favors because of someone's popularity.

Grunt Work: Extremely Loud Sex Interrupts Tennis Match at Sarasota Open (LISTEN)
Since Sharapova returned to tennis last month after a 15-month suspension for testing positive for a banned substance, she has been given wildcards by three other tournaments, including the Italian Open. That tournament's organizers were sharply criticized for not granting one to former French Open champion Francesca Schiavone, an Italian.

At her first games since the hiatus, Sharapova was cheered on by devoted fans but she eventually lost to Kiki Mladenovic in the semifinal of the Stuttgart Open, and didn't achieve a high enough ranking to secure a spot in qualifying round for Roland Garros without a wild card.

UEFA Gives €1 Million to Crimean Football Union to Promote Sport Development
The 30-year old Russian initially was given a two-year suspension for testing positive for the banned hormone and metabolic modulator meldonium at last year's Australian Open. The supplement had previously been allowed for years, and Sharapova said she overlooked announcements by WADA that it had been added to the ban list on January 1, 2016.

The Court of Arbitration for Sport reduced the suspension on appeal, ruling she bore "less than significant fault" in the case and could not "be considered to be an intentional doper."

Sharapova, who has held titles from all four majors, won at Roland Garros in 2012 and 2014.

Asked Monday whether she would be disappointed not to receive a wildcard to the second grand slam of the year, she told reporters, "Nothing is a disappointment after being away from the game for 15 months."