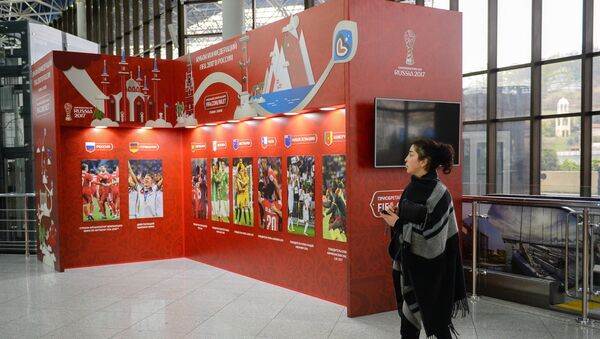 © Sputnik / Nina Zotina
/
Go to the photo bank
Subscribe
Russian President Vladimir Putin has signed an order that will strengthen security measures during both the 2017 FIFA Confederations Cup and the 2018 World Cup.

The 2017 Confederations Cup will be held in Russia between June 17 and July 2. The quadrennial event will bring together the national teams of Australia, Cameroon, Chile, Germany, Mexico, New Zealand, Portugal and Russia. FIFA started selling tickets for the Confederations Cup earlier in April.

Russia will also host its first ever FIFA World Cup between June 14 and July 14 of next year. The matches will be held in the cities of Moscow, St. Petersburg, Kazan, Yekaterinburg, Sochi, Rostov-on-Don, Kaliningrad, Samara, Saransk, Nizhny Novgorod and Volgograd.