While All Eyes Are on Syria, This Jihadist Group Gathers Momentum in Asia 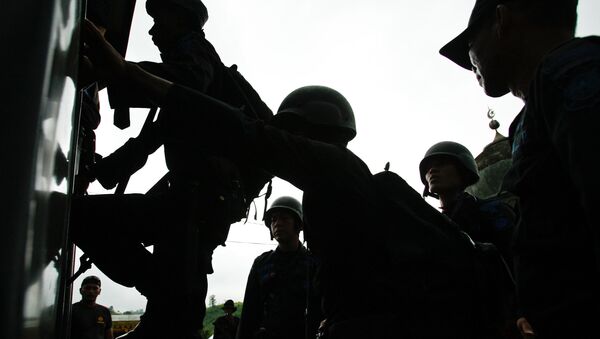 Jemaah Islamiyah (JI), a terrorist group intent on establishing a caliphate in Southeast Asia, has reportedly rebuilt itself in recent years following a decline in 2007, the Institute for Policy Analysis of Conflict (IPAC) asserted, adding that the group responsible for 2002 bombing in Bali has also invested into creating its militarized force.

Since 2010, Jemaah Islamiyah "has been building a clandestine military wing while broadening its traditional base through above-ground preaching and recruitment on university campuses," IPAC said in its latest report released on April 27.

'Stable’ Indonesia Bets on ‘Soft’ Approach to Beating Terrorism
The IPAC maintains that the group does not present "an immediate threat" to Indonesia and the region since it has pledged not to use violent means to pursue its ultimate goal of establishing an Islamic state in Southeast Asia. In addition, the organization has been fiercely opposed to Daesh.

"The purpose of the new military wing is not to deploy it in acts of terrorism but to build a capacity for producing and using weapons in preparation for an eventual confrontation with the enemy – or bid for power. That aim may have been temporarily halted … but it is not likely to go away," the IPAC said.

To this end, Jemaah Islamiyah is reported to have sent an unknown number of its members to Syria between 2014 and 2016 so that they would acquire "military and combat skills," training with radical groups fighting to overthrow President Bashar al-Assad. JI militants did not receive training from Daesh.

Pentagon Chief Questions Syria Safe Zones Plan as Russia Saves the Day... Again
The IPAC acknowledged that the latest incarnation of Jemaah Islamiyah should be considered a security risk.

"The danger is not so much that the current leadership will return to violence. It is rather that if recruitment continues, a more militant wing may split off as has happened repeatedly in JI’s long history," the report said.

"Interestingly, relations between Jemaah Islamiyah and Daesh have been complicated. JI leaders foresaw that Daesh could fail in the Middle East and tried to distance themselves from the group. However, soon those who were sentenced following 2002 and 2009 terrorist attacks in Indonesia will be out of prison. Some of those who fought in Syria and Iraq will return home unnoticed. Then infighting among Jemaah Islamiyah members will escalate," he said.

What Life is Like Under Daily Daesh Shelling in Besieged Deir ez-Zor (PHOTOS)
Kosyrev further said that the same trend has been visible in Malaysia, with local jihadists opting for a similar tactic from the moment Russia sent its forces to assist Damascus in its efforts to tackle radical groups in Syria.

"They understood that there would be no mini-caliphate in the Middle East. They also took into account that those who were suspected of taking part in combat operations would be detained on the border. Instead, they have started to infiltrate legitimate institutions, engaging in campaigning and lawmaking," he explained.