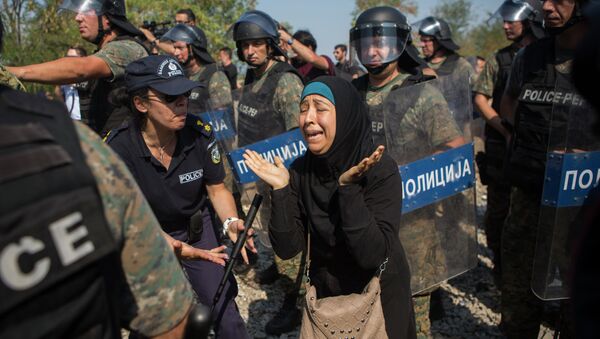 Members of the European Parliament have called for an "urgent solution" to the migrant crisis facing Europe amid disagreement over a relocation scheme to move thousands of refugees out of migrant camps in Greece and Turkey, which has so far only seen 16,000 moved in 18 months.

Following a conference in Thessaloniki, Greece, May 8, on the need for "a truly European solution to the refugee crisis based on the principle of respect for fundamental human rights," the president of the Global Progressive Forum, Socialists and Democrats, Enrique Guerrero Salom, said EU members had a duty to engage to resolve the crisis by working together.

"Our duty is to promote a common progressive approach to the refugee and migration crisis based on respect for human rights and solidarity between EU institutions and member states. I express my gratitude to the Greek people and authorities for their efforts and democratic approach to this humanitarian crisis," said Salom.

After a heated debate in the 1st panel, now onto a discussion on managing refugee flows in #Europe pic.twitter.com/9jbgcDVB59

"EU member states must now take up their responsibilities in a spirit of solidarity for accelerated and steady relocation from Greece and Italy. We must urgently find solutions especially in terms of relocation and integration," he said.

"With a budget of US$272 million, this year our focus is on two key objectives: to move refugees from camps to rented accommodation and to move away from catering to a cash system and communal kitchen facilities," European Commissioner for humanitarian aid and crisis management Christos Stylianidis said.

"Our commitment is to continue helping the Greek authorities in their response to the refugee crisis. We will continue to provide our assistance to those who need it most, in a neutral and impartial way," he said.

Our two @eu_echo priorities in #Greece in 2017:move more refugees to appartments & a cash-based system w/ food kitchens instead of catering pic.twitter.com/uIGKy6lVQD

"We express our solidarity with the Greek citizens, with the local and regional authorities, with the efforts of the Greek government. But we must push for relocation to continue, for the Dublin regulation to take into account the realities of the present circumstances and for an initiative to lower tensions with Turkey. The precious agreement gives us time to breathe, but we must use this time wisely," said Socialist and Democrat (S&D) MEP Miltos Kyrkos.

The Commission, 2015, promoted the controversial scheme to relocate 160,000 from Italy and Greece to relieve pressure on both countries, but the scheme has so far only relocated a little over 16,000 — just ten percent of the original target, which itself was reduced to 98,255.

Until we apply common asylum system & automatic relocation mechanism, the EU-Turkey statement is all we have #refugeeswelcome #topotami pic.twitter.com/VPkkHZXy7P

​There are two relocation plans on the EU agenda: the Greece-Italy relocations — designed to take the weight off those two counties and redistribute refugees across EU member states according to a mandatory quota system — and the EU-Turkey deal to relocate "irregular migrants" (those refused asylum) back to Turkey in return — on a one-for-one basis — for Syrian refugees in Turkey being relocated around EU member states.

However, according to the Commission, so far only 18,119 have been relocated under the relocation scheme (as at May 9, 2017). The Commission has threatened to punish any member state that still refuses to allocate spaces for refugees by September 2017 — two years after the original agreement was made.

"Today we had an excellent discussion on the safety of our borders and the integration of the refugees " Our priority is to protect the children, especially the unaccompanied ones, while maintaining a balance in our priorities and supporting the Greek and European people living in extreme poverty, since countries like Greece and Italy have been guarding the borders for many years and the resulting cost of the migration crisis is unbearable. We need to exchange best practices and form a holistic strategy to face the crisis," said S&D MEP Eva Kaili.