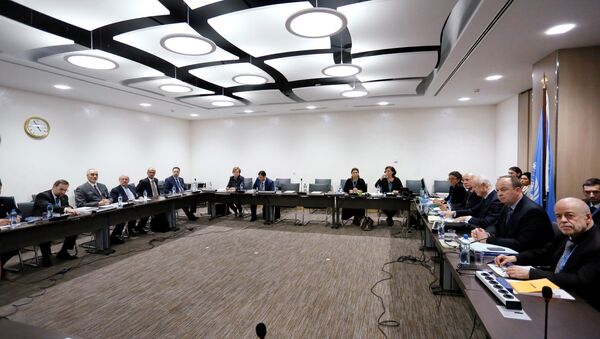 Syrian authorities will take part in the next round of the Syrian settlement talks in Geneva, Syrian Foreign Minister Walid Muallem said Monday.

UN Secretary General Welcomes Astana Agreement on Safe Zones in Syria
MOSCOW (Sputnik) – Damascus will take part in the next round of the talks on Syrian settlement taking place in Swiss capital, although it approves neither the opposition groups' reluctance to believe in Syrians' interests nor their adherence to the policy of the powers, supporting them, Syrian Foreign Minister Walid Muallem said Monday.

On April 29, Russian Deputy Foreign Minister Mikhail Bogdanov said the next round of the Geneva talks may take place in mid-May, however, the date had not been set yet. The previous round took place on March 23-31.

"We will go to Geneva when the date of the next round of talks is confirmed, but, unfortunately, in the opposition we do not see dialogue partners who believed in the Syrian people’s interests," Muallem said during a press conference.

Geneva May Host Russia-US-UN Syria Talks Next Week - Russian Deputy FM
The opposition groups participating in the Geneva talks stick to the policy of the states which support them, Muallem added, noting that it complicates political settlement process.

The Syrian civil war has been raging for six years, with government forces fighting against both Syrian opposition groups who strive to overthrow President Bashar Assad, and numerous extremist and terrorist groups such as Daesh and Jabhat Fatah al Sham, both outlawed in Russia. Russia, Turkey and Iran are the guarantors of a nationwide Syrian ceasefire regime that came into force on December 30, 2016.

Syrian settlement talks take place on two parallel platforms: the UN-mediated Geneva talks, and the Astana talks, brokered by Russia, Turkey and Iran. The fourth round of Astana talks, held on May 3-4, resulted in adoption of memorandum on establishment of four safe zones in Syria. According to the memorandum, no clashes between government forces and armed groups should take place in the zones starting from May 6.