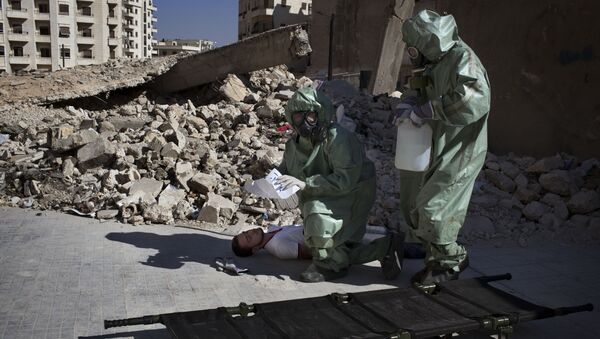 © AFP 2023 / JM LOPEZ
Subscribe
International
India
Africa
The filming of staged attacks with the use of "poisonous substances" is being reported by Syrian residents and the opposition, the Russian center for Syrian reconciliation said on Saturday.

HMEYMIM (Sputnik) – On May 4, citing a diplomatic source, RIA Novosti news agency as well as other Russian media published an article alleging that Qatar-based television channel Al-Jazeera's stringers filmed a staged attack in the settlements of Seraqeb, Erich and Jisr Shughur (Idlib province). According to the source, the footage was ordered from a European country.

On Saturday, the Russian centre for reconciliation of opposing sides in Syria reported citing local residents and opposition representatives that special ‘video brigades’ made staged videos of the concequences of an alleged chemical attack in Syria.

"According to information from a number of sources among local residents and opposition formations … special ‘video brigades’ carried out staged filming in the past week of the alleged concequences of shelling and airstrikes, including the use of ‘poisonous substances’," the reconciliation center said.

The center added that some of the "consultants" of the brigades were "recognized by the locals as cameramen shooting news in the region for the Al Jazeera channel," the center added.

However, Al-Jazeera TV channel has denied these allegations.

Coincidence? White Helmets Work Only in 'Areas Where Islamist Groups Operate'
Members of the Syrian Civil Defense, known as the White Helmets, take a selfie with their certificates after taking part in a training session in the rebel-held eastern Ghouta area, east of the capital Damascus, on November 22, 2016

It is not the first time reports of such filming have emerged. On May 2, Al Mayadeen broadcaster reported, citing local sources and eyewitnesses, that a group of the White Helmets’ activists accompanied by one of the Arab satellite channels arrived in the area near Idlib in Syria to shoot staged videos allegedly depicting consequences of a chemical attack.

White Helmets is a Syrian humanitarian organization that claims to have saved tens of thousands of lives. The activists of the organization are often depicted saving people from under debris and providing first aid to civilians.

However, the Swedish Doctors for Human Rights (SWEDHR) non-governmental issued a report earlier in the year stating that the "lifesaving" procedures shown in the videos published by the White Helmets are incorrect, fake and "ultimately performed on dead children."