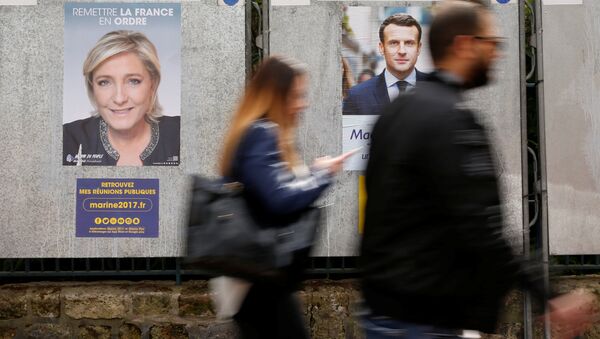 Experts are sure that French centrist presidential hopeful Emmanuel Macron will win the second round of the elections.

MOSCOW (Sputnik) – French centrist presidential hopeful Emmanuel Macron is more likely to win in the second round of the elections than his right-wing rival Marine Le Pen, experts told Sputnik on Friday ahead of the Sunday runoff, pointing to Macron’s appeal to young voters.

On April 23, Macron and Le Pen became the two top contenders in the first round of the presidential elections. According to French Interior Ministry data, Macron won the first round with 24.01 percent, while Le Pen came second with 21.3 percent.

Macron is more likely to win in the runoff, despite Le Pen’s matching appeal, Jagdish Sheth, Professor of Marketing at the Goizueta Business School of Emory University, told Sputnik.

Le Pen has promised to renegotiate France’s EU membership or hold a nation-wide referendum on leaving the European Union if elected, while Macron has expressed pro-European views, at the same time calling for reforms that would prevent a possible "Frexit."

"While both candidates (Macron and Le Pen) clearly suggest that people want change, I think Macron will win the election in May," Sheth said, explaining that Macron is "young and charismatic" and that all French mainstream parties "will join behind him to make sure Le Pen is not elected."

Le Pen Denies Her Party Had a Role in Revelation of Macron's Offshore Accounts
The possible victory of Emmanuel Macron could be a positive outcome for the European Union, as it would give a boost to the European integration process, Michael Emerson, an associate senior research fellow at the Centre at the European Policy Studies in Brussels told Sputnik.

"2016, the year of the populists in western democracies, is over, and 2017 is a return to a more careful and intelligent political leadership, starting in France, but including the Netherlands who had an important election recently and looking forward to the German elections in the autumn between [Angela] Merkel and [Martin] Schulz, both of whom are solidly pro-EU, which is the case for Macron," Emerson said.

As far as foreign policy is concerned, Macron is a very careful, intelligent and diplomatic man, Emerson claimed.

"He will have serious conversations at an early stage with both [US President Donald] Trump and [Russian President Vladimir] Putin. Macron will try to steer Trump in the direction of becoming a member of the western order, rather than a wild card which tweets its way," Emerson predicted.

Le Pen’s election pledge to lead France to exit the European Union also diminishes her chances of winning the presidential elections on Sunday as the French electorate is prioritizing unity of the bloc, Emory University's Sheth said.

Macron to Become President With 62% of Votes, 38% to Support Le Pen - Poll
This is mainly due to the extensive economic integration of the French economy with its neighbor and Europe's top economy Germany, according to the expert.

"Over the years, there has been significant integration between the German and the French economies with respect to markets and manufacturing. This includes automobiles, appliances and energy products. Therefore, I don't expect Le Pen to swing enough votes to swing the election in her favor," Sheth said.

The geopolitics expert argued that contrary to the case of Brexit, the Franco-German relationship is much stronger than Anglo-German or Anglo-French ties, thus making a Frexit a much less favored than in the euroskeptic United Kingdom.

Macron to Visit Merkel in Germany First Thing if Elected
France's adoption of the euro has further weakened the chances for a Brexit-style withdrawal unlike its neighbor across the English Channel, which has kept its national currency, he added.

Le Pen stressed on RTL radio on Friday that Macron’s program is that of "social destruction" and deregulation. She claimed that Macron was a candidate of the oligarchs, adding that the social situation in France would only aggravate should he become new president.

On Thursday, Macron published former US president Barack Obama's video address in support of his campaign on his Twitter account.

Thierry Mariani, a lawmaker from the French center-right The Republicans party and an incumbent member of the French parliament's Foreign Affairs Committee, told Sputnik that Macron was a candidate churned up by the establishment, as evidenced by the support that Barack Obama has expressed for the social-liberal En Marche! party member.

"No names have been named by Macron, although we do know some of his close supporters. His economic adviser is Jean Pisani-Ferry, who is a very distinguished and experienced economist. He has a very safe and intelligent pair of hands on the economic side. On the trade policy, the international side, European policy in general he is supported by Pascal Lamy, who is former Director-General of the WTO [World Trade Organization] and former European Commissioner, to name a few," Emerson said.

On Thursday, Macron filed a legal complaint, not targeting any specific party, over allegations that he owned an offshore bank account in the Bahamas.

Speculations concerning Macron's offshore accounts have been circulating on social media for some time, with the candidate repeatedly refuting the rumors. On Wednesday, such allegations were made by Le Pen during the TV debates with Macron. Le Pen's words triggered a sharp response from En Marche! with the party stating that these remarks would have legal consequences under the French defamation laws.

The French prosecutors have already opened an inquiry into the suspected spreading of disinformation aimed at disrupting the presidential voting process.

At the start of this week, numerous rallies were held across France. Demonstrations were organized by France’s national trade unions against Le Pen on Monday. Protests against both Le Pen and Macron were also held in several French cities.

Activists of non-governmental environmental organization Greenpeace unfurled a banner on Friday with the French republican slogan "Liberty, Equality and Fraternity" and the word "Resist" on the Eiffel Tower in Paris. The message was aimed at urging French voters not to support Le Pen.

About a dozen of activists were detained on Friday for placing the banner.

Paris Students Protest Against Presidential Hopefuls Ahead of Sunday Vote
Numerous protesters, mainly students, gathered in the city of Reims in France's northeastern Grand Est region on Friday and blocked Marine Le Pen, who had arrived for a surprise visit, in the main cathedral for almost an hour. Local media reported that Le Pen had to leave the city cathedral through the back door.

According to a Thursday Elabe poll, Le Pen’s rival Macron was identified as the winner of the final Wednesday election debate, with 63 percent of respondents saying he was more convincing than the former National Front party leader.

An Odoxa poll showed on Friday that Macron’s chances to defeat Le Pen in the second round of the presidential elections had gone up by 3 percent over the past week.