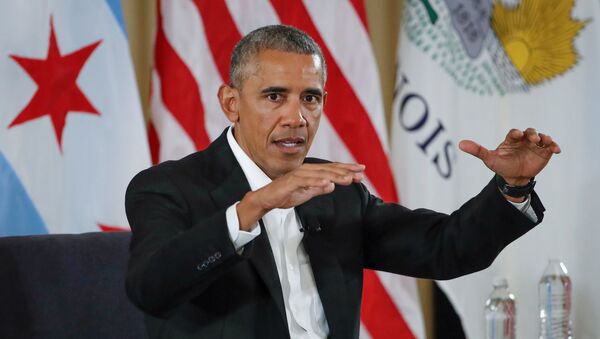 'Manufactured Consent' Alive and Well in France's Presidential Election Campaign
Earlier the former president of the United Stated Barack Obama publicly endorsed the candidacy of French presidential hopeful Emmanuel Macron. In a video released on May 4, Obama declared that he isn’t "planning to get involved in many elections… but the French election is very important to the future of France and the values that we care so much about."

Thierry Mariani, The Republican Party MP, told Sputnik France that this endorsement was rather unexpected and reeks of double standards.

"The fact that a former head of a foreign state has endorsed one of the candidates is unexpected. Imagine for a second that Vladimir Putin endorsed Marine Le Pen – everyone would’ve screamed bloody murder. If a head of another country – for example, (Nicolas) Maduro – was to endorse Melenchon’s candidacy, everyone would’ve screamed bloody murder. But apparently Obama’s squeaky clean so no one said a world about it," Mariani said.

All in all, he added, this endorsement once again proves that Macron is a "system candidate."

"It also once again confirms that there are double standards at work here, because everyone would applaud a statement made by Obama, but if a similar statement was made by leaders of other countries everyone would’ve been shocked," he explained.

And last but not least, Mariani also pointed out that this development and the public reaction to it raise some very interesting questions about US neocolonialism.

"Imagine what would happen if a French minister were to endorse a candidate during elections in some African country. We would’ve been immediately accused of neocolonialism. So could we be looking at American neocolonialism? This question does come to one’s mind time to time, doesn't it?" Mariani said.