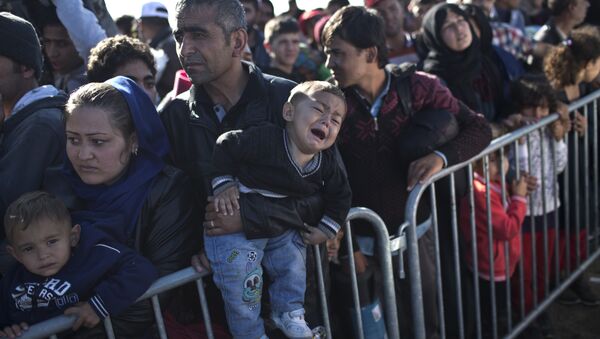 © AP Photo / Muhammed Muheisen
Subscribe
International
India
Africa
In nine out of 15 Eastern European states, at least half of the population spoke against accepting any number of Syrian refugees, a survey released by Gallup on Friday said.

MOSCOW (Sputnik) — According to the poll, the majority in Eastern Europe would bar Syrian refugees from entry, with anti-refugee sentiments being the highest in Hungary, Macedonia and Montenegro, with 70, 66 and 65 percent, respectively.

The nations with larger Muslim populations, such as Albania and Kosovo, showed more support to the idea of their country accepting all the refugees, but even so the number of those supporting the possibility was no more than 8 percent, the survey showed.

Syrian Refugees: 'Europe Does Not Want Us out of Its Fear of Islam'
Greece, which is one of the main entry points for hundreds of thousands of Syrian refugees, notably expressed support to the belief that a limited number of refugees should be allowed to enter the country, with 47 percent sharing such an opinion.

Looking at the religious affiliation of the views regarding the refugees, 63 percent of respondents that considered themselves atheists or secular spoke against accepting any refugees, compared to 36 percent of Muslims and 54 percent of Christians, the survey showed.

The survey was conducted in April-July 2016 among 1,000 adult respondents in every country. The margin of sampling error ranges from 3.5 to 3.8 percentage points.

According to the EU Border agency, over 500,000 undocumented migrants from North Africa and the Middle East crossed the borders of the European Union in 2016.