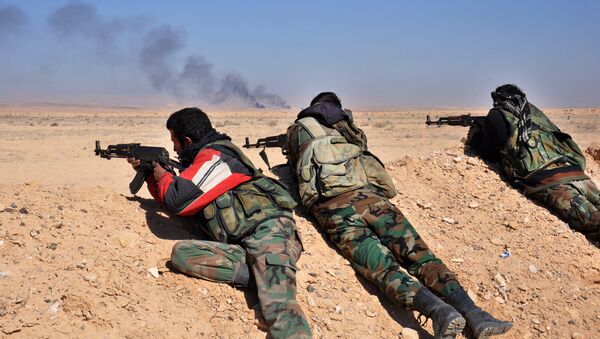 A military source in the Syrian military information center told Sputnik Arabic that the Syrian Army has taken the Al-Shumariya mountain chain in eastern part of the Homs Governorate under control, sending terrorists fleeing the area.

As the result of the fierce fighting, the government army has liberated a 9 km long and 13 km wide strip of the Al-Shumariya mountain chain from militants, following multiple strikes by Russian air force warplanes and attack helicopters on Daesh positions in the area, the source told Sputnik.

The fighting is still going on near the al-Shumariya and Jabal al-Jirah mountain range in eastern Homs, he said.

The Tel al-Triks and Tel al-Ialam heights of the Al-Shumariya chain are also under the control of the Assad army, which opens a route for the government forces to make further advances. Dozens of terrorists have been killed and many wounded in the fighting.

Syrian Army Liberates 236 Settlements From Daesh Since January – Russian MoD
According to the source, the army has cut short an attempt by the militants to capture army positions to the west of Maksir al Hisan village near the mountain chain,  with many militants being reported killed during the battle, and many more seen fleeing.

He refuted reports that the army has halted its operation to liberate the northern part of the Homs Governorate. The army, he said, is continuing its assault on the positions of terrorists and is strengthening it positions on all fronts.

In Daraa city in southwestern Syria the army is attacking the militants in the districts of Tarik al-Sad, al-Abasiaya, al-Furn, around al-Jumruk al-Kadim and on the southeastern outskirts. Again, many terrorists have been either killed there or were seriously wounded, he said.