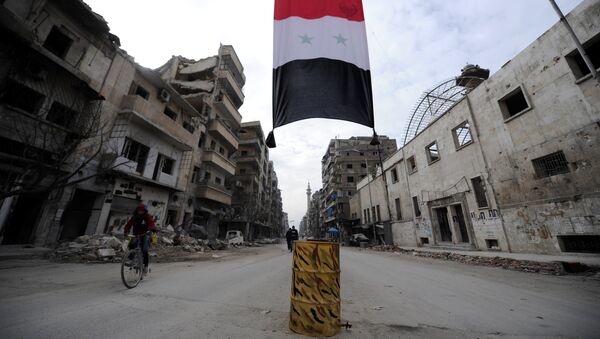 Russia, Turkey and Iran will form a joint working group on de-escalation composed of their authorized representatives in order to delineate the lines of the de-escalation areas and security zones as well as to resolve other operational and technical issues related to the implementation of the memorandum on Syria, according to memorandum.

Next High-Level Meeting on Syria in Astana to Take Place in Mid-July
ASTANA (Sputnik) — Russia, Turkey and Iran will set up a working group on drawing up the maps of proposed safe zones in Syria within two weeks after signing the de-escalation zone memorandum during the Astana peace talks, the document, which was obtained by Sputnik Thursday, said.

The document was signed by the three Syrian ceasefire guarantor states during the fourth round of Astana talks that kicked off on Wednesday. The Russian-proposed initiative stipulates the creation of security zones in the Idlib province, to the north of the city of Homs, in Eastern Ghouta and in the south of the country. Syrian government forces and opposition would be precluded from engaging each other in these areas by means of guarantor-run security buffers, checkpoints and observation posts.

"The guarantors shall in 2 weeks after signing the memorandum form a joint working group on de-escalation (hereinafter referred to as the Joint Working Group) composed of their authorized representatives in order to delineate the lines of the de-escalation areas and security zones as well as to resolve other operational and technical issues related to the implementation of the memorandum," the memorandum reads.

Armed Syrian Opposition to Continue Astana Talks Participation Thursday
The safety zone maps themselves will be prepared within a month by June 4, according to the document.

The maps will help separate territories held by moderate opposition groups from areas held by terrorists such as the Daesh and the Nusra Front, both of which are outlawed in many states, including Russia.

On Wednesday and Thursday, Astana is hosting a fresh round of talks between Damascus and the Syrian opposition, with the participation of delegations from the Syria ceasefire guarantor states, as well as from the United Nations, which attends the talks as an observer.