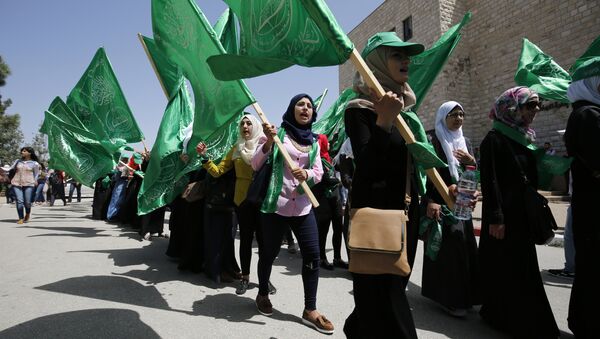 © AFP 2023 / ABBAS MOMANI
Subscribe
International
India
Africa
US President Donald Trump met Palestinian Authority President Mahmoud Abbas at the White House for the first time on Wednesday. And Hamas, the ruling party in the Gaza Strip, has announced it is willing to recognize the state of Israel according to its 1967 borders. Could these developments actually lead to peace for the troubled region?

Hamas Ready to Support Palestinian State in 1967 Borders
Hamas' new charter says it will not pursue the destruction of the state of Israel and is ready to recognize Israeli-Palestinian borders as they were established in 1967. News of the new policy document came just as Trump was preparing to meet with Abbas in Washington.

Radio Sputnik's Brian Becker spoke with Massoud Shadjareh, co-founder of the Islamic Human Rights Commission, on whether these developments might actually lead the troubled region to peace.

The idea behind the Hamas charter was in the air for some time, Shadjareh said. But the decree has been met with some negative response, both from supporters of Hamas — Hezbollah, for instance, condemned the idea and urged Hamas to work to liberate the whole region from Israel — and from Israelis, who say the document is an act of political deception.

"Hamas is attempting to fool the world but it will not succeed," said David Keyes, a spokesman for Israeli Prime Minister Benjamin Netanyahu, according to a CNN report. "Daily, Hamas leaders call for genocide of all Jews and the destruction of Israel. They dig terror tunnels and have launched thousands upon thousands of missiles at Israeli civilians. Schools and mosques run by Hamas teach children that Jews are apes and pigs. This is the real Hamas."

According to Shadjareh, it is crucial to remember that Palestinians, far outgunned by Israeli weaponry, are fighting for their survival amid Israeli white phosphorous bombings and other war crimes. Survival is a victory in and of itself, and at this point it completely is irrelevant what borders the Palestinians seek, he said.

However, Shadjareh pointed out that this move on the part of Hamas is aimed at gaining more international recognition. The borders issue is secondary to the fact that Hamas has disassociated itself from the Muslim Brotherhood, an international organization acknowledged as terrorist in many states, including Egypt, Russia, Syria and Saudi Arabia.

Abbas, Trump Talks Opportunity for Israeli-Palestinian Crisis Resolution
Cairo has blockaded the Gaza Strip because of its Muslim Brotherhood affiliation, though Egyptians are generally sympathetic to Palestinians. Now that the affiliation to the terrorist organization has been cut, pressure on Egyptian authorities to be more friendly towards Gaza will be high, Shadjareh said.

As for Abbas' visit to the White House, however, Shadjareh pointed out that Trump is a strong supporter of Israel, and while his recent rhetoric may appear more pragmatic, those he surrounds himself with, like his son in law Jared Kushner, US Ambassador to Israel David Friedman, UN Ambassador Nikki Haley — these people form a strongly pro-Israel administration, according to Shadjareh.

"With someone like Trump in power, all Palestinians need to mobilize and put their differences aside," he said. "We all know how much Trump is bent towards… a pro-Israeli and pro-Zionist agenda."