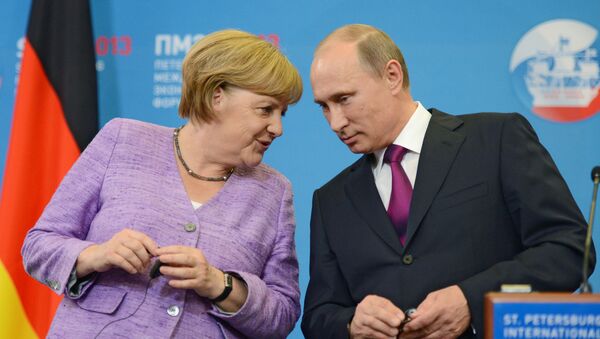 German Chancellor Angela Merkel's largely unexpected visit to Sochi is a "fishing expedition" aimed at determining whether Berlin could play a part in resolving the conflicts in Ukraine and Syria, Vladimir Bychkov wrote for Sputnik.

"No one in Russia has really expected [Merkel] to come. The German chancellor previously said that she would pay a visit [to Russia] only after significant progress is made in Ukraine and Syria. Perhaps, the light at the end of the tunnel has indeed appeared somewhere. But it is visible only in Moscow and Washington, not Berlin," the analyst said. "I think that Merkel will come [to Russia] … on a reconnaissance mission. Will she have a place in the upcoming Russia-American chess game title 'geopolitics'?"

Merkel will meet with Russian President Vladimir Putin in the Black Sea resort of Sochi on May 2, with Ukraine and Syria expected to be the main topics on the agenda.

How Merkel's Meeting With Putin Fits Into 'Germany's Foreign Policy Ambitions'
"Ukraine is a problem for Germany, but purely because Germans at first fanned the flames [of the conflict] and then became a mediator. It has turned out that Berlin is ill-suited for this role. [Ukrainian President Petro] Poroshenko has ignored Merkel and [French President Francois] Hollande's attempt to persuade him," Bychkov said.

Gazeta.ru referred to the Ukrainian civil war as the key point of contention between Russia and Germany. Nevertheless, Berlin "is determined" to push the Minsk peace process ahead and work out a roadmap to resolve the conflict. "Moscow is also interested in stabilizing the situation, but it is skeptical that Poroshenko is ready to adhere to the clauses of the Minsk agreements which he himself signed in 2015," the newspaper said.

"Even the appearance of progress in Eastern Ukraine would be important for Merkel's image since Germany is the key player of the Normandy format, which includes Russia, France and Ukraine," the media outlet added.

Tough Times: Merkel to Meet Putin Amid Difficult Times for Germany
Berlin's close relations with Washington will to a certain extent complicate talks between Putin and Merkel.

"The fact that Berlin has long aligned itself with the United States when it comes to foreign policy should be taken as a given. This is why it could not be referred to as a negative factor to consider during the upcoming visit. Moscow always takes such things into account," political analyst Kirill Koktysh, ‎Associate Professor at MGIMO-University, told Gazeta.ru.

The analyst added that the United States has multiple means to exert its influence on Germany. Moreover, Berlin's cordial relations with Washington have largely remained unaffected by elections.