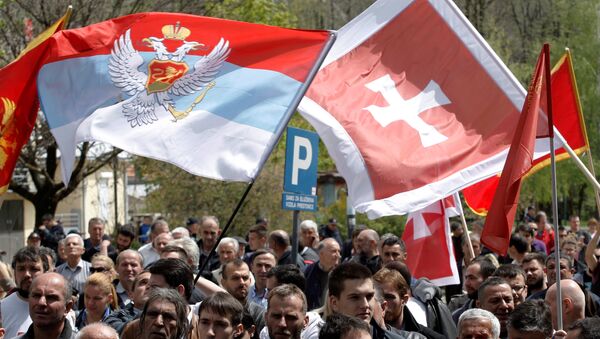 © REUTERS / Stevo Vasiljevic
Subscribe
Last week Montenegro became one step closer to becoming a full-fledged member of the North Atlantic Alliance after the country's parliament ratified the NATO membership agreement despite popular discontent. According to analyst Igor Pshenichnikov, one person in particular, former President and Prime Minister Milo Djukanovic, is behind this. 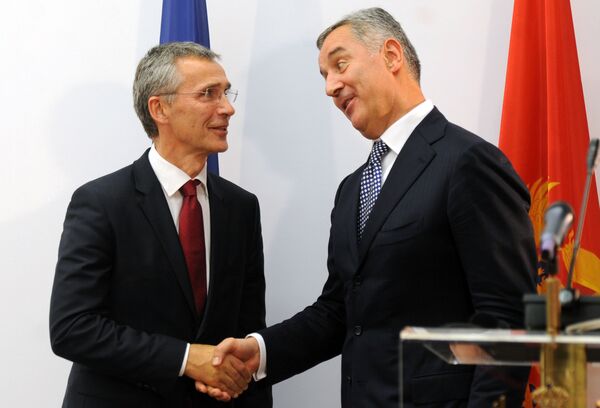 Djukanovic "has spent more than 20 years hell-bent on pushing Montenegro at first to part with Serbia and then join NATO," Pshenichnikov, an advisor to the director of the Russian Institute for Strategic Studies (RISS), wrote in an opinion piece for Sputnik, adding that the politician has shady past.

Djukanovic's close links to organized crime are "an open secret" in Montenegro, Serbia and the Balkans in general, as well as Brussels and Washington, the analyst observed. Serbian media outlets have published multiple stories detailing that during the war chaos in Yugoslavia in the 1990s Djukanovic was involved in smuggling cigarettes to Europe.

"Montenegro became the center of a multi-billion dollar illicit business, which saw cigarettes smuggled through the Adriatic Sea to Italy," he said. "Djukanovic was the key person in this operation. It is well known that during the investigation in Italy, a court in Naples dismissed an arrest warrant for Djukanovic due to his immunity as a Prime Minister."

Pshenichnikov maintained that Djukanovic was an ideal person for NATO since he was "obedient and controllable" due to the sheer amount of damaging material the US-led military alliance had on him. The bloc, he added, used the Montenegrin politician to force the country to divorce Serbia and later "drag the republic into NATO."

Montenegro: Ratification of NATO Treaty 'Goes Against the Will of People'
The latter was accomplished through a vote in parliament instead of a referendum, the only possible way since the majority of Montenegrins are opposed to NATO membership.

"Even pollsters controlled by Montenegrin authorities released data showing that 50 percent of the population is against Montenegro joining NATO. According to surveys released by patriotic organizations in Serbia, this figure in fact exceeds 60 percent," Pshenichnikov said. "The outcome of a referendum, if it were held, has always been clear to everyone. This is why Djukanovic and his Democratic Party of Socialists of Montenegro were fiercely opposed to a referendum."

Following the April 28 vote in the parliament, the Russian Foreign Ministry issued a statement expressing "deep regret that the current leadership of [Montenegro] and its Western backers didn't heed the voice of conscience and reason." The move, it added, came in "violation of all democratic norms and principles."

000000
Popular comments
The mafia cabal that controls the so called government of Montenegro under the maffia boss Milo djukanovic can join nato as much as they want , but the Serbian people of Montenegro will never accept this, and it will be void as soon as this criminal and his gang are behind bars charged with treason. Long live freedom Russia and Serbia forever!

danielmartin516
1 May 2017, 11:58 GMT6
000000
a small men without horizon joking on his citizens...
francescoslossel
1 May 2017, 12:12 GMT1
000000
Newsfeed
0
New firstOld first
loader
LIVE
Заголовок открываемого материала
Access to the chat has been blocked for violating the rules . You will be able to participate again through:∞. If you do not agree with the blocking, please use the feedback form
The discussion is closed. You can participate in the discussion within 24 hours after the publication of the article.
To participate in the discussion
log in or register
loader
Chats
Заголовок открываемого материала
Worldwide
InternationalEnglishEnglishMundoEspañolSpanish
Europe
DeutschlandDeutschGermanFranceFrançaisFrenchΕλλάδαΕλληνικάGreekItaliaItalianoItalianČeská republikaČeštinaCzechPolskaPolskiPolishСрбиjаСрпскиSerbianLatvijaLatviešuLatvianLietuvaLietuviųLithuanianMoldovaMoldoveneascăMoldavianБеларусьБеларускiBelarusian
Transcaucasia
ԱրմենիաՀայերենArmenianАҧсныАҧсышәалаAbkhazХуссар ИрыстонИронауОssetianსაქართველოქართულიGeorgianAzərbaycanАzərbaycancaAzerbaijani
Middle East
Sputnik عربيArabicArabicTürkiyeTürkçeTurkishSputnik ایرانPersianPersianSputnik افغانستانDariDari
Central Asia
ҚазақстанҚазақ тіліKazakhКыргызстанКыргызчаKyrgyzOʻzbekistonЎзбекчаUzbekТоҷикистонТоҷикӣTajik
East & Southeast Asia
Việt NamTiếng ViệtVietnamese日本日本語Japanese中国中文Chinese
South America
BrasilPortuguêsPortuguese
NewsfeedBreaking
03:23 GMTWho’s the Best Football Player in the World?
02:45 GMTAmerican Film Institute Establishes Scholarship in Memory of Halyna Hutchins
02:30 GMTMore Than 10,000 Sequoias Must Be Removed After California Wildfires, National Parks Reveal
01:00 GMTWho has the Edge Between Manchester United and Liverpool?
00:12 GMTBritish Military Brings Over 100 People Who Had Left Afghanistan to UK - Defense Ministry
YesterdayUS Seeking Clarity Over Turkey’s Intention to Declare US Ambassador Persona Non Grata
YesterdayUS Authorities Getting Veterans Involved in Resettlement on Afghan Refugees - Reports
YesterdayBiden’s Popularity Drops More Than That of Any Other US Leader Since End of WWII - Poll
Yesterday‘Rust’ Director ‘Gutted’ by Fatal Shooting of Halyna Hutchins on Set
YesterdayPotty-Mouthed PM: Broadcaster Blocks Boris Johnson's Remarks on Gay Men, Muslim Women
YesterdayHome Run! The Astros Win a Ticket to the World Series Amid Sign-Stealing Scandal
YesterdayColombian Authorities Reportedly Capture Elusive Drug Lord Otoniel, Leader of Clan del Golfo
YesterdayTwitter CEO Jack Dorsey Issues Cryptic Warning of ‘Hyperinflation’ Soon To Happen in the US
YesterdayOne Person Killed, 7 Injured in Shooting Near University Campus in US
YesterdayIran Set to Cooperate With Islamic World in Nuclear Development - Spokeperson
YesterdaySupermarkets in UK Reportedly Use Cardboard Cut-Outs to Disguise Empty Shelves
Yesterday5.0 Magnitude Earthquake Shakes La Palma as Spanish Island Territory Reels From Volcano Eruption
YesterdayJeremy Clarkson Slams 'F***ing Government' at Farming Awards Ceremony - Video
YesterdayPakistan Denies Reports of Preparing to Sign Airspace Agreement With US
YesterdayWatch Massive Migrant Caravan Push North Into Mexico as US Reports Record Apprehensions