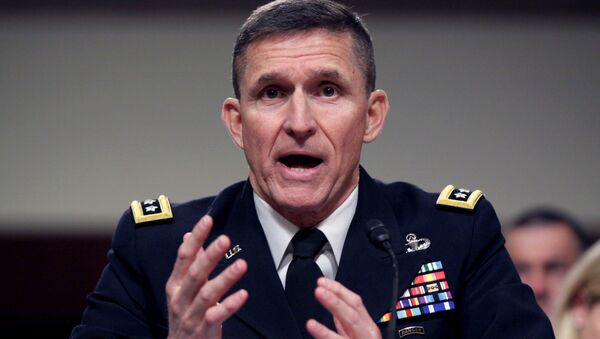 Cassandra Fairbanks
All materials
On Tuesday, the leaders of the House Oversight Committee announced that they believe former National Security Adviser Michael Flynn may have broken the law by receiving payments from RT and not immediately disclosing them.

Republican Rep. Jason Chaffetz and Democratic Rep. Elijah Cummings asserted that Flynn may have violated federal law when he applied for his security clearance without disclosing his business dealings. They also attacked the White House for refusing to provide internal documents relating to Flynn.

“In short, the White House has refused to provide this committee with a single piece of paper in response to our bipartisan request, and that is unacceptable,” Cummings said.

Speaking to Sputnik’s Loud and Clear, Ray McGovern, former CIA analyst and activist, discussed what he believes to be behind the attempt to re-energize the anti-Russian witch hunt.

White House Takes Flak For Denying House Oversight Committee Flynn Docs
“This is a witch hunt. Flynn is a very very interesting and very complicated person. He has some integrity, but he is also pretty dumb about some things that he should have attended to,” McGovern said. “He’s dumb about taking all that money; now, when I say ‘all that money’ we’re talking about a fraction of what Hillary Clinton or Bill Clinton take for their speeches – or, now, Barack Obama.”

McGovern noted that former US President Bill Clinton took $400,000 for speaking before a Russian oil group just three years ago.

“This is blown way out of proportion,” McGovern added, noting that he should have registered as an agent of Turkey if he was working with them.

“Like I said, he’s dumb about some things,” McGovern said. “Now, let me tell you Brian, what he had integrity about, because this has to do with why they hate him so much. Back in the summer of 2013, when Flynn was head of the defense intelligence agency, he warned everyone that would listen – and this is clear in some leaked cables – that ISIS is going to form their own little caliphate, and really succeed, unless we change our policy.”

His bosses at CENTCOM and in the White House didn’t care for Flynn’s statements, McGovern explained.

In 2013, there was a chemical attack using homemade sarin gas outside Damascus. Nine days later, then Secretary of State John Kerry spoke at the State Department and repeatedly asserted that Syrian President Bashar al-Assad was behind the attack.

“He was lying,” McGovern said of Kerry’s statement.

“Now what happens next? Who was head of DIA, it was a fellow named Michael Flynn. He asked his people, ‘who did the sarin attack?’ They said, it’s a little embarrassing, it wasn’t Bashar Assad as John Kerry was saying – it was our guys (the rebels).”

McGovern stated that it was the moderate rebels, and noted that they are run by CIA Director John Brennan.

Due to Flynn’s integrity and refusal to go along with the Syria story, he made many enemies within the neoconservative ranks.

Trump's Former Adviser Page Stresses All Dealings With Russia Above Board
While the media has been all over the fact that Flynn took money from the Russians, they have not been showing the easy-to-find footage of the RT Q&A session in question.

During the event, Flynn focused on terrorism and discussed the situation in Syria.

"I'm going to address your question because it's a good question. It's an interesting one. What keeps me up at night are members of the Islamic State, whatever you want to call them,” Flynn said. “What keeps me up at night is the use of chemicals and biological weapons by terrorist groups that have the intent, they have the intellect, they don't necessarily have the specific types of capabilities just yet, but I believe that they will have the ability to get their hands on them. I think that all of us globally need to really pay very close attention to that."

The mainstream media, for months, have been after those who are trusted most by President Donald Trump’s base – Steve Bannon, Kellyanne Conway, Stephen Miller, and of course, General Flynn, who happens to be a lifelong Democrat. Interestingly, they have ignored those like Reince Priebus, Gary Cohn and Jared Kushner, the neocons who oppose Trump’s anti-interventionist war stances and are seemingly more in line with the hawkish aggression that failed Democratic candidate Hillary Clinton longed for – and America voted against.