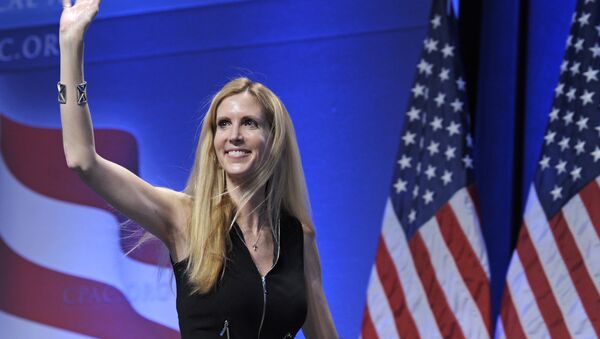 A law firm representing Berkeley College Republicans and the Young America’s Foundation has filed a lawsuit against the University of California over their rescheduling of Ann Coulter’s appearance on campus to take place when students are not in class.

The date the school offered is during a “dead week” when students are busy preparing for their final exams, according to the lawsuit filed on Monday.

Originally, Coulter was scheduled to speak on April 27, but the event was cancelled by administrators, who claimed it was due to “security concerns.”

“In the wake of events surrounding the planned appearance by (right-wing speaker) Milo Yiannopoulos in February, as well as several riots which have occurred in recent weeks in the city of Berkeley, we have increased our scrutiny regarding the time and location of high-profile speakers so that these events can go forward unimpeded,” university officials wrote in an email to the organizers.

Milo Yiannopoulos Resigns From Breitbart, Announces New Media Venture
Following Coulter’s refusal to accept the cancellation, and outcry from the public, the university offered May 2 as an alternative.

Late last week, Harmeet Dhillon of Dhillon Law Group, which is representing the student groups, sent off a strongly worded letter to the administration, promising to sue if they did not remedy the situation.

“In each of the three recent conservative speech censorship instances, UC Berkeley impermissibly has allowed a ‘heckler’s veto’ to suppress the free speech rights of speakers properly invited by recognized student groups, and in each case, did so after first attempting to bully the students out of pursuing their quest to hear these alternative voices by piling on requirement after unconstitutional requirement – ‘security fees,’ inconvenient hours, inconvenient locations, attendance restrictions, and more,” Dhillon wrote in the letter.

Dhillon also pointed out that UC Berkeley was the home of the 1964 ‘Free Speech Movement,’ in which students proudly protested and rallied to overturn a ban on political activities on campus. He noted that the university, once a beacon of free speech, is now  “leading the vanguard to silence conservative speech on campus.”

The university also cancelled an appearance by conservative writer David Horowitz earlier this month, while allowing for former Mexican President Vicente Fox to speak without incident.

Last weekend saw violent clashes between conservative and leftist activists, at a “Patriot’s Day” event organized by Donald Trump supporters in Berkeley, many of whom say they were provoked by leftist agitators in the predominantly liberal community.

FBI to Investigate Anti-Milo Yiannopoulos Riots in Berkeley
Earlier this year, a speech by right-wing political commentator Milo Yiannopoulos was also shut down by rioters. The campus was vandalized, a mobile generator powered light was firebombed and multiple attendees were assaulted and injured during the clash.

Yiannopoulos has now vowed to hold a week long “Free Speech” event on the campus later this year, vowing to turn the event into a month long occupation — complete with tents — if the university refuses to comply.

“We will establish a tent city on Sproul Plaza protesting the university’s total dereliction of its duty and encourage students at other universities to follow suit,” Yiannopoulos warned in a media release.

The event will feature discussions on feminism, Islam, globalism, Black Lives Matter and other issues that Yiannopoulos believes to be threats to free speech.

“I will bring activists, writers, artists, politicians, YouTubers, veterans and drag queens from across the ideological spectrum to lecture, march, and party,” he wrote.

The date of the free speech event has not yet been announced.