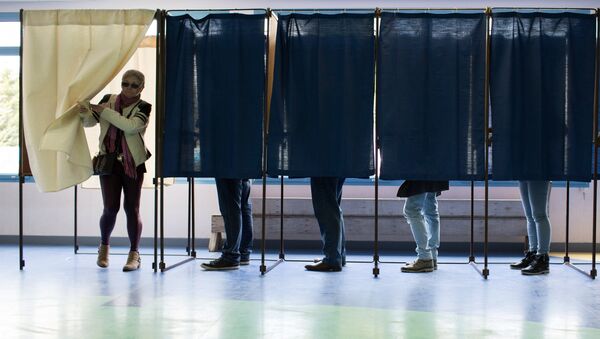 The presidential election voting continues in France on Sunday, without any incidents so far, in one of the most uncertain elections in the modern French history as any of the four top candidates might make it into the second round.

PARIS (Sputnik) — On Sunday, over 66,000 polling stations opened in France at 8 a.m. local time (06:00 GMT). About 47 million voters are expected to cast ballots. The first results are expected at around 8 p.m. local time, when the polls close.

The top five presidential hopefuls have already cast their votes in different parts of the country, which is holding the first ever presidential election under the state of emergency. According to media reports, Femen activists appeared near a polling station in the commune of Henin-Beaumont where Le Pen was expected to vote. The law enforcement detained several women wearing masks of famous politicians and with Team Marine written across their naked chests.

The security has been heightened to ensure that the voting happens without incidents. According to the French government, the country's security forces were fully mobilized with 50,000 police officers and 7,000 army personnel being dispersed in order to ensure citizens' safety.

So far the voting at the 2017 presidential election in France has been going smoothly. The only incident has happened at the French consulate in New York. The voting was suspended for some time after a suspicious car was found near the consulate's building, French media reported.

Why Fillon 'Risked' Commenting on Crimea Prior to France's Presidential Election
There were no long queues at the polling stations even in early morning hours, when many French people came to vote with their families and friends, a Sputnik correspondent reported on Sunday.

Some of the people at one of the polling stations in the center of Paris told Sputnik they were relieved that the Election Day had finally arrived, noting that they hesitated to vote, not being 100 percent behind their candidates.

About 1.5 million French expats around the world, who are eligible to vote, also headed to the polls. Residents of Canada and the United States have already cast their ballots. Voters in Asia and Australia headed to the polls earlier on Sunday. The expats' vote represents about 2 percent of all French voters.

Preliminary results provided by the Belgian RTBF broadcaster suggested that Melenchon was leading in Saint Pierre and Miquelon, Martinique and French Guiana, while Macron was the preferred candidate in Guadeloupe and among French expats in the Americas (although the results from Montreal were not available).

Fillon Expects No Change in France If Macron Wins Presidential Election
In order to cast a ballot in France, a citizen must be over 18 years old, not legally banned from voting and registered on the electoral list.

The same rules apply to presidential candidates. They must also show a sense of "moral dignity." A presidential hopeful must also collect 500 signatures of support from elected representatives. Anyone who is able to fulfill these criteria becomes eligible to run in the first round. If nobody wins the first round with the absolute majority, the two highest scoring candidates face each other in the run-off.