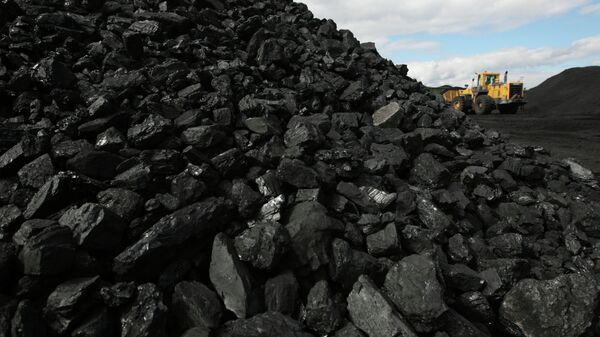 In an interview with Sputnik, Russian political analyst Igor Yushkov said that by seeking to scrap Russian coal imports, Kiev seems to be asserting once again that politics is more important than the economy.

Now Kiev plans to clinch a contract for the supply of anthracite coal from the United States, an option which Nasalyk insists is beneficial, both in terms of logistics and price.

"If we agree on this contract [with Washington], then we will not need all the other contracts," he added.

The blockade resulted in disruptions in anthracite shipments from breakaway parts of the Donbass region, which forced the government to introduce a state of emergency in the energy sector.

In 2016, Ukraine received anthracite from Russia and South Africa. Against the backdrop of the trade blockade of the Donbass in the first quarter of 2017, Russia remained the largest supplier of coal to Ukraine.

"Kiev sticks to the logic that politics is more important than the economy, and they will constantly reiterate that they are given huge discounts. The Ukrainian Energy Minister's words that this [US coal import] option is beneficial for Ukraine are nonsense. In the American market, coal is really cheap, but when you start delivering it to Ukraine, it will cost much more than possible imports of Russian coal, not to mention [shipping it] from the Donbass," Yushkov said.

According to him, Kiev is deliberately keeping mum on the fact that the cost of coal supplies from the US will be quite high.

Yuskhov explained that delivering US coal to Ukraine would necessitate expanding the capacity of the Ukrainian rail network and even constructing new railroads, something that will certainly mean allocating hefty sums for the purpose.

"However, Kiev adheres to political logic which dictates that it is necessary to buy coal elsewhere, but, God forbid, not in Russia," Yushkov concluded.

Kiev to 'Buy Russian Coal' if Ukraine’s Energy Sector Risks Shutdown
In early April, two Ukrainian thermal power plants (TPP) suspended operations, including one in the Kiev Region, due to a shortage of anthracite coal.

Currently, Ukrainian TPPs have a total reserve of nearly 100,000 tons of anthracite. Yury Korolchuk, a member of the supervisory board of the Ukrainian Institute for Energy Strategies, told the Russian online publication Vzglyad that those reserves would only last one or two week